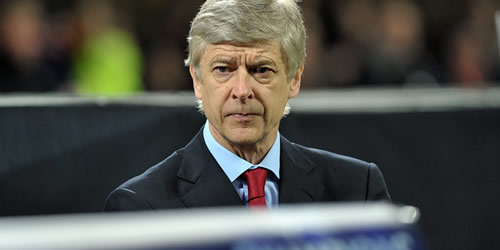 Alex Song is convinced Arsenal can overturn their four-goal deficit and move into the Champions League quarter-finals at AC Milan’s expense on Tuesday night.

The Gunners endured a torrid evening at the San Siro in the first leg as they were put to the sword by Massimiliano Allegri’s side in a humiliating 4-0 defeat.

But Song believes that impressive league wins over Tottenham Hotspur and Liverpool have filled Arsene Wenger’s men with confidence ahead of the visit of the Serie A side.

“Of course we can do it,” Song told Arsenal’s Official Matchday Programme. “In the last couple of games we’ve showed very good things and we’ll take encouragement.

“We didn’t play well in the first leg against Milan, we know that, so now we need to show another face. We’re at home with our fans behind us and we’ll try to put on a big game.

“I can promise that we’re ready to fight – we have the quality, we have the opportunity and we’ll do what we can. Milan is a big team but we’ll battle hard and see where that takes us.”

And the Cameroon midfielder admits the Gunners are “lucky” to have the prolific forward at the club.

“Everyone knows that Robin can make the difference in every single game he plays,” Song continued.

“We’re happy and lucky to have him in our squad. I work well with him in training and I know how he moves. When I have the chance I try to give him a good ball, and if I do that then I know he can score at any time.”

Meanwhile, Arsenal boss Wenger believes AC Milan’s four-goal lead has left his side with nothing to lose going into Tuesday’s last-16 second leg.

“Sometimes when you made a big score [in the first leg], the difficulty is always psychological problems,” said Wenger.

“When you have made a big difference you think you just need to turn up and make sure you defend well. And the other team has nothing to lose so they just go for it.”

Wenger added: “We want to have a real go, we want to make it possible. I would not be very credible to tell you we want to score five goals and then leave Robin van Persie out.

“We will not accept going out of the Champions League because we want to stay in. We will give it our best shot.”

• Arsenal will attempt to do what only three clubs have previously managed in any Uefa competition – recover a four-goal first-leg deficit.

• AC Milan themselves hold the record for the biggest first-leg victory overturned in the Champions League era, losing 4-0 at Deportivo La Coruna in the 2003-04 quarter-finals having won 4-1 at home.

• The Rossoneri have suffered recent Champions League last-16 defeats against Premier League opponents, losing to Tottenham Hotspur 12 months ago and Manchester United after being elimintated by Arsenal in 2007-08.

• Zlatan Ibrahimović has committed 20 fouls in the Champions League this season, the joint highest total of players still involved along with Stefan Kiessling.

Mario Balotelli: I have grown up at Manchester City this season