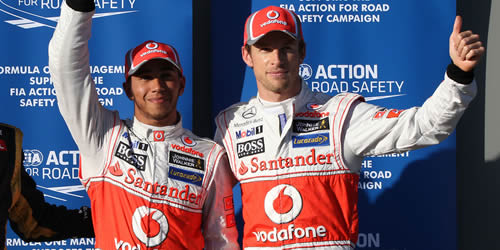 Lewis Hamilton produced a stunning lap to win pole position for the Australian Grand Prix, with team-mate Jenson Button securing an all McLaren front-row for the season-opening race on Sunday.

Hamilton’s lap of 1.24.922 was unsurpassed with Button clocking a time just 0.152 seconds slower.

“It’s an incredible feeling to be back here [on pole] and to get off to such a good start,” said Hamilton afterwards. “I think this is mine and Jenson’s first one-two – I believe at least – in qualifying, so it’s fantastic to start the season this way.”

Lotus’ Romain Grosjean earned a surprise third on the grid, easily the best qualifying of his short F1 career ahead of Michael Schumacher’s Mercedes in fourth.

“We would have loved to have been closer to the front, but in Q3 I wasn’t happy with my lap,” said defending world champion Vettel.

Ferrari were the day’s biggest casualties, with neither Fernando Alonso or Felipe Massa making it through to the pole position shoot out.

Alonso beached his car in the gravel and will start 12th, while Massa was even slower and struggled to get out of Q1 – he will start 16th.

Three unfamiliar names topped the timesheets in the first part of qualifying – Sauber’s Kamui Kobayashi was quickest from debutant Jean-Eric Vergne in the Toro Rosso with Grosjean third.

Vergne and Kobayashi both faded in the second part of qualifying however and will start 11th and 13th.

Kimi Raikonnen’s return to Formula 1 didn’t go to plan and he struggled in the first session, eliminated alongside the Caterham, Marussia and HRT cars.

The Finn will start a place higher than he qualified after Sergio Perez in the Sauber was handed a five place grid penalty for changing his gearbox.

Perez will be the 22nd and final runner for tomorrow’s race.

As expected given their dismal performance in practice, neither HRT driver qualified within the 107 per cent rule, and it is the second successive year HRT have failed to qualify here.

Pedro de la Rosa finished nearly two seconds behind Charles Pic’s Marussia – the next slowest – and over six seconds behind pole sitter Hamilton, with Narian Karthikeyan a further tenth and a half back.