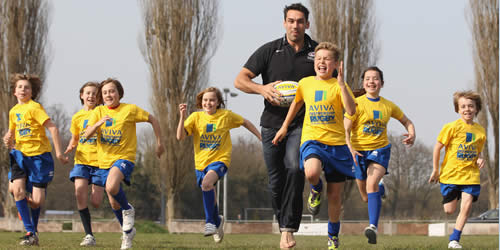 Saracens forwards coach Alex Sanderson believes the Aviva Premiership Rugby Schools Programme will unearth the next Owen Farrells, claiming the £2m investment can give rise the next generation of England stars.

Sanderson was on hand to give a coaching masterclass at Fullerians RFC, which hosted the annual schools rugby festival within Sarries’ catchment area – an event mirrored by every Premiership club up and down the country.

The Aviva programme is being implemented in 650 schools nationwide, reaching more than 39,000 pupils every year and is aligned to the national curriculum and PE syllabus, ensuring widespread participation among schoolchildren.

And having played a key role in 20-year-old Farrell’s progression through the Saracens and England ranks, Sanderson is convinced that some of the children taking part will be running out at Twickenham in the future.

“Saracens are working with Aviva and their schools programme and it covers about 650 schools across the land and it spends a lot of money,” said Sanderson, who also presented the trophy to tournament winners from Harvey Road School.

“But it’s not just the £2million they spend, it’s the time that they devote, along with the Saracens coaches, to these young kids to get them out and into team sports and rugby is a conduit for that.

“Everyone has a brilliant time at these things – the coaches, the adults, the kids alike and it teaches them the discipline of working in a team and listening to a referee and keeping them fit.

“It’s a community project as much as a rugby project but the end game is that Aviva and Saracens will have some part to play in the raising and promoting future England rugby stars.”

Former back row Sanderson, 32, began his career at Littleborough RFC before heading to Sale Sharks and earning five England caps and then moving to Saracens when a back injury cut short his career aged just 25 back in 2005.

And he admits that when he was growing up, he didn’t have access to the benefits of the Aviva Premiership Rugby Schools Programme, insisting the scheme will increase the popularity of rugby.

“There wasn’t really anything like this when I was younger. Now there are younger and younger age-groups all the way down to grass roots level,” he added.

“We used to have clubs that we went to but this is within the schools and part of the curriculum and it encompasses a lot more people than club rugby did back in the 80s.”

Alex Sanderson was coaching children from the Aviva Premiership Rugby Schools Programme, designed to increase participation in the sport and unearth England’s future stars. Find out more at avivapremiershiprugby.com