Fabrice Muamba latest: Support continues to flood in for midfielder

Messages of support continue to flood in for Bolton midfielder Fabrice Muamba, who remains critically ill in intensive care 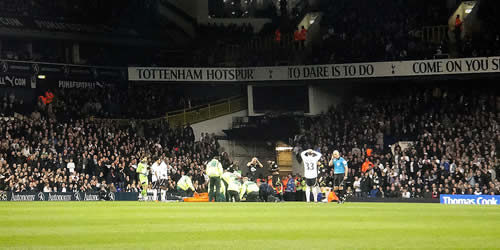 Messages of support continue to flood in for Bolton midfielder Fabrice Muamba, who remains in intensive care after collapsing during his side’s FA Cup quarter-final at Tottenham.

The 23-year-old’s heart condition is “stable” – but he remains seriously ill at the London Chest Hospital’s heart attack centre after suffering a cardiac arrest during Saturday’s game.

A statement issued by Bolton and the hospital on Monday evening read: “He is continuing to show signs of improvement this evening.

“He is currently able to breathe independently without the aid of a ventilator. He has also been able to recognise family members and respond to questions appropriately.

“These are all positive signs of progress. However, his condition remains serious and the medical staff in intensive care will continue to monitor and treat him.

“His family and club would like to thank the media for continuing to respect their privacy at this time.”

Players and fans worldwide have sent thousands of messages of support for the former Arsenal man. Here is a selection of the latest.

Bolton boss Owen Coyle: “The support from within the game has been fantastic. We all saw the pictures from round the world. When you see the players of Real Madrid and Gary Cahill, wearing T-shirts, and David Beckham sending over a message, that shows you the opinion they have of Fabrice as a man. It’s great to be talented, at whatever vocation you are in, but it is more important to be genuinely nice and humble, which Fabrice is.”

Arsenal manager Arsene Wenger: “You pray that the damage will be repaired and that Fabrice will come out healthy and we will see his smile again. That is all you wish for. As a man, Fabrice has a positive attitude towards life, he is full of determination and has a great desire. Everyone at Arsenal has huge respect for Fabrice. Even after he left us, he often passed by to say hello and speak about how it was going for him. We feel very deeply attached to him.”

Arsenal midfielder Jack Wilshere: “Was devestated to hear the news about Fabrice Muamba on Saturday. I played with him at Bolton and when I went there on loan he was a fantastic guy who showed me around and made me feel so welcome especially as it was my first time away from home. Praying that he pulls through.”

Liverpool striker Luis Suarez: “I want to dedicate to Muamba the goal and the FA Cup semifinals qualification. Keep fighting buddy, don’t give up! You will make it!”

Arsenal head of youth development Liam Brady: “Fabrice was always a happy boy at Arsenal, a well-mannered boy. He seemed to really appreciate the opportunity he had and was fully intent on giving his best. He has been like that ever since he was 12. He comes to visit us, he calls in when he can. Fabrice remembers where he came from and he’s a smashing young man. He’s determined to make the best of his career and let’s hope that determination helps him pull through the situation he is in.”

Ex-Bolton defender Gary Cahill, now at Chelsea: “It was nice to get the goal but it was a bit of a blur for me, my mind was in a different place. After seeing what happened yesterday I wish Fabrice all the best and I hope he recovers quickly.”

Queens Park Rangers boss Mark Hughes: “The events of the weekend were shocking for everybody and I think it resonates people in the football business because it just demonstrates the fragility of life. It’s really a terrible time for his family. We just hope that there’s a great outcome to what’s been a really terrible weekend.”

Juventus playmaker Andrea Pirlo: “We wanted to dedicate our goals to Bolton’s player Fabrice Muamba, who is fighting for his life. We are all close to him and hopefully he will recover soon.”

I needed those! Fernando Torres relief at ending Chelsea drought