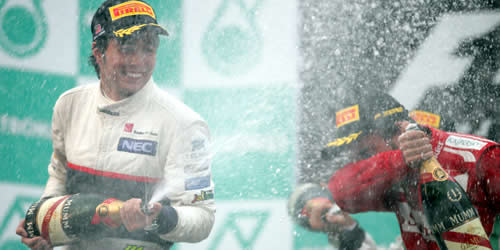 Sauber looked on course for their first victory in Malaysia thanks to a stunning drive from Sergio Perez, before the Mexican eventually fell short whilst chasing down eventual winner, Ferrari’s Fernando Alonso.

Still, the second place he earned was Sauber’s best result in their history (excluding the four seasons BMW owned the team), and most fans were willing him on as he reeled in the double world champion as each lap passed.

However, in what should be a time for celebration in the Swiss team’s ranks, they are having to fend off unsubstantiated questions of taking orders from Ferrari – their engine suppliers – to warn Perez off and hold station.

Fuel has been added to the fire after the worldwide television audience heard Perez’s race engineer Marco Schupbach tell the young driver, “We need this position,” which has been read by some as a coded message to back off.

What this suggests is that the team could not believe their luck at being in the position they were and a simple reminder that regardless of any do-or-die move into the first corner on Alonso, Perez would be a hero for bringing the car home on the podium.

Sauber have always been a midfield team at best and have never had so much of a sniff of moving past fourth in the constructors’ title.

This prudent team, who enjoy modest sponsorship – their car livery is testament to this – will be delighted to secure 18 points, which will undoubtedly prove crucial in the constructor’s championship at the end of the season.

As for the accusations, it is hard to envisage them to be true. Peter Sauber may be a businessman, but most of all he is a racer and, on Sunday, he had the chance to see what even the most optimistic Formula 1 viewer believed would never happen.

A Sauber taking the chequered flag. The unfamiliar Swiss national anthem playing out over the PA system as Formula 1 historians record a new entry in the tomb marked race winners – both driver and constructor.

That Sauber would allow anyone – even the almighty Ferrari – to stand in the way of this is incomprehensible.

Of course, Ferrari have form for using coded messages to benefit their favoured driver. Just ask Rubens Barichello, who suffered from being team-mate to the most successful driver that has ever lived, Michael Schumacher.

More recently, Felipe Massa’s surrendering of the lead to Alonso at the 2010 German Grand after the Brazilian’s race engineer Rob Smedley delivered barely concealed messages to let the Spaniard through remains a sore point, as it was the last time Massa was remotely near race winning form.

However, that is a world away from demanding another team call off their charging young driver, on the way to recording an unlikely first victory and there is simply no proof Ferrari did this.

What conditions could they have laid down that would seriously make restraining Perez an attractive option?

The loss of Ferrari engines after this year would be a loss to Sauber, but there are more engine suppliers out there who would be glad of the money another F1 contract would bring them.

Then there is the question of whether Perez would have listened anyway if the order did indeed come. After producing the drive of a lifetime , following an inspired decision to change tyres ahead of every other car on track, he pulled himself into contention for victory in extremely changeable conditions.

Perez would likely have conveniently developed a broken radio and ploughed on for the overtake anyway – and given the comparative performance of the two cars at that point, he probably would have streamed past Alonso, DRS-aided into turn one on the final lap for a famous win.

His mistake in the final laps is being eyed suspiciously as the gifting of the win to Ferrari – whilst it appears only to be down to decreasing grip, and perhaps a little overexcitement at the situation he found himself in.

Indeed, the celebrations of Perez, his boss and mechanics were not that of a team that had just been warned off talking to a girl by a bigger, meaner boy.

Sauber will probably not scale these heights again for a long time – this was very much a result of inspired strategy and making the very most of the conditions – and they should be applauded, not sniped at, for pushing a world class driver in Alonso so very close.

You can read more of Steven Oldham’s work on www.mancunianmatters.co.uk/sport