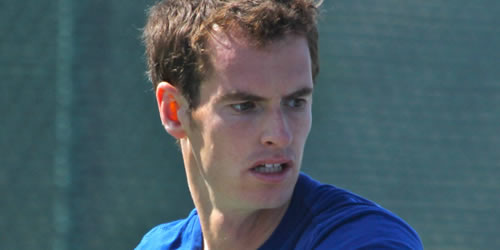 This year had started so much better for Andy Murray than 2011.

For while he may have lost to Novak Djokovic at the Australian Open for the second straight year, the nature of his defeat this time was entirely different: a wondrous five-hour battle that could as easily have ended in the Scot’s favour.

Murray went on to beat Djokovic in the Dubai semis before losing out to Roger Federer in the final, and he looked—and talked of—feeling calm, confident and healthy as he practised, sometimes twice a day, at the Indian Wells Tennis Garden.

But on a cool night in the desert, despite looking like a ray of morning sunshine in bright orange against a court bleached to pale mauve by the floodlights, history repeated.

Last year, Murray fell in his opening match against the 143-ranked Donald Young. This year, he fell to the 92-ranked Spaniard, Guillermo Garcia-Lopez.

It was, in truth, always a tricky first match. The rangy, unpredictable 28-year-old reached a career-high ranking of 23 exactly a year ago—and his less-than-conventional skills have been deployed in equal measure between clay, hard and grass courts.

But the world No4 had won 31 of his last 35 matches in a display of consistency—especially on hard courts—that made him one of the favourites to win his first BNP Paribas Open this year. The icing on the cake was his success against the Spaniard, most recently an 82-minute, 6-1, 6-1, 6-2 demolition in their last meeting at the 2011 Australian Open.

But Garcia-Lopez laid out his wares in the opening game, on Murray’s serve, pummelling his ground-strokes to the baseline before Murray wrenched control to hold.

The Spaniard’s opening serve looked, initially, frail and Murray was already teasing him with the odd drop shot. At this stage of the game, though, the leggy Spaniard was up to the retrieving sprint, and he held serve through a first break point with a long rally that showed off just what fine shot-making the Spaniard has at his disposal.

He has, in particular, an unusual single-handed backhand with a short, punched delivery, but his slap of a cross-court forehand also quickly came into play.

Murray responded by upping the pace to hold his second service game with a 131mph delivery, but Garcia-Lopez was not fazed. He began to fire some fine—and elegant—winners off both wings for a love hold. Murray replied in kind and appeared to take the upper hand with a 0-40 advantage for three break points, but the Spaniard reeled off five straight points to hold.

Gradually, a distinct difference in approach emerged. Murray tried to up the tempo, and at every change of ends, he was first out to the baseline waiting to play, while Garcia-Lopez always waited for the umpire to call time.

Whether it was eagerness to get the match finished or a reluctance to hang around in the cooling air, the tactic was unclear. Asked about the temperature afterwards—particular the contrast with his day-time practice sessions, he would not admit to a problem.

“The conditions here are obviously different at night, as they are everywhere in the world. It’s a little bit cooler so the ball is not going through the air as fast. But I have normally played very well on night matches. It’s never been a problem for me before.”

Such was the Murray urgency that he stepped well inside the baseline to receive every second serve, but his eagerness brought errors too. On break-point in the ninth game, he over-hit a forehand almost a foot long and Garcia-Lopez led for the first time in the match, 5-4.

The Spaniard kept the pressure up with his best serving of the set, Murray made a string of returning errors and went down, 6-4.

With the start of the second set, Murray again prowled the baseline eager to get started, but Garcia-Lopez would not be hurried, and his backhand was worth the wait. It went straight and true both cross-court and down the line and Murray went 15-40 down.

A timely drop shot saved the first, but an untimely one, reached by Lopez and killed with a volley, brought up yet another break chance, and the Spaniard stayed patient, slowed things down with plenty of slice, and Murray over reached once more.

He was 2-0 down and was very nearly broken again, but survived four break points and immediately turned the tables on his opponent with a 40-0 lead and three break-back points. The Spaniard, though, regained his rhythm and, for the second time in the match, won five straight points to hold, closing the game with a bullet of a forehand winner.

At 4-2, Garcia-Lopez earned another break point and another forehand winner skipped off the baseline for a 5-2 lead.

All the Spaniard had to do was hold serve and he did so with style to love, for a famous victory.

To most onlookers, it was hard to see where things had gone wrong for Murray—other than meeting a fluid, classy, near-error-free performance so early in the tournament. He certainly had no explanation: Indeed his tone of voice and downcast face at his hastily-summoned press conference needed none. He nevertheless tried to put it into words:

“I have to go away and think about what happened.

“I played great in practice, was hitting the ball really well, felt pretty fresh…In comparison to last year I was feeling way, way better…mentally I was feeling much better too, way more focused and confident, so I’m not sure exactly why that happened tonight.”

“Obviously my goal now for the next two weeks is to prepare for Miami.”

Obviously, because Murray has had a tawdry time in the second American Masters, too. He lost his openers there both last year and the year before. And bearing in mind that Miami is both his training base and his second home for much of the year, success in Florida would be significant on all fronts.