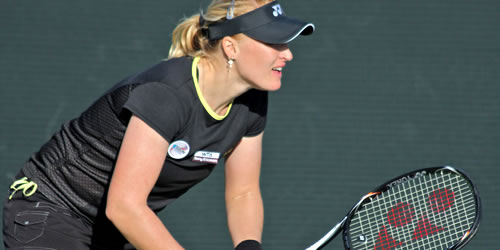 Elena Baltacha believes the changes she has made to her game will help improve her ranking after the world No62 fought back from a set and a break down to beat Aranxta Rus 3-6 6-4 6-3 at Indian Wells.

The 28-year-old British No1 made a sluggish start to the first-round match but recovered from losing the first set to level at 1-1, before winning five successive games in the decider to book her place in the second round.

“I’m really, really chuffed with the win. Honestly, I really needed that,” said Baltacha, before admitting she has had no choice but to adapt her style of play as she bids to break back into the top 50.

“I knew I had to change my game,” she continued. “If I stayed the way I was playing, I would have some great wins but I would stay around the 50 or 60 mark and I didn’t want to do that. There’s more I can have as a player.”

The pair faced each other twice in 2011, with Baltacha winning in three sets in Dallas, before losing to the German in Luxembourg last November.

“I played her twice, quite recently as well,” she added. “I know that [Great Britain Fed Cup team captain] Judy Murray has done a bit of scouting on her so that information will help as well.”

Baltacha was part of Murray’s Great Britain side which beat Israel 3-0 in the Fed Cup in February to set up a World Group II play-off against Sweden in April.

And Britain’s top ranked woman hailed Murray’s influence – the GB captain was in attendance for both Anne Keothavong and Baltacha’s first-round ties – and claimed the Scot’s presence helped her on court.

“Fed Cup helped my confidence loads,” said Baltacha. “Judy has brought a lot of amazing stuff to the team and it really showed the last day.

“The atmosphere was really calm, and that was all because of Judy, how she behaved, what she gave off, it kept us all very tight.

“It’s great having Judy around. She’s kind of like a free spirit. She’ll go and do like she wants, and I love that. She’s never been here, but I always like it when Judy’s on court. She gives really good advice.”

Baltacha’s compatriot Keothavong was beaten 6-4 2-6 7-5 by Timea Bacsinszky in the first round.