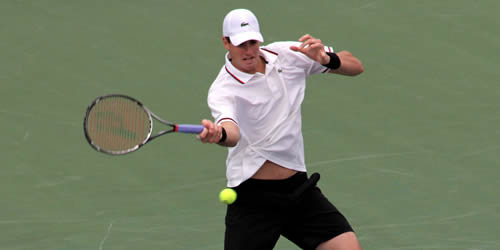 It never rains in California—or so the song goes. And it certainly never rains in Palm Springs—well only five days a year—according to every local in the desert oasis down road in Indian Wells.

But the mountains make their own weather, as anyone from the unpredictable British Isles knows, and everyone at the BNP Paribas Open was on tenterhooks as clouds of varying shades of purple and grey bubbled over the ring of mountains that embrace this tennis cathedral.

It was men’s semi-final day, sold-out Saturday, and a programme that featured the top three men in tennis for the 23rd time since Roland Garros 2007: Novak Djokovic, Rafael Nadal and Roger Federer.

The script, though, was even better for the enthusiastic American home crowd, for the fourth member of the quartet was the fast-rising American John Isner, enjoying his first month in the top 15 and up to No11 courtesy a final-four showing in Delray Beach and a quarter-final finish in Memphis last month.

After not getting past the last 16 in his first 23 Masters events, Isner was now in his second quarter-final on the bounce: first at Paris and now on home turf. But the most recent sign of his form came in February’s Davis Cup tie against Switzerland where he scored a significant win over Federer, on clay, in four sets.

But while Isner had the incentive of a top-10 ranking if he beat Djokovic, it was a big ask, even for a man with one of the biggest serves in the game. And what a serve it can be, delivered from a 6ft 9in frame with an efficient and clean action—he led the Indian Wells field with 45 aces.

And he opened serve well here, but the third game brought an unexpected break to love as Djokovic hit his returns with his eagle-eyed sharpness.

Isner held strongly after that, though, throwing in some neat volleys behind his big first serves, but he could not close the gap. A small window in the eighth—a deuce—was quickly closed with a couple of big serves from Djokovic and, at 5-4, the Serb stepped up to serve for the set. However, at 30-40 down, he stopped play to challenge a baseline ball, only to see it in. Isner had the break and the place erupted.

It certainly lifted Isner: He cranked up his serve to 138 mph, a big forehand held a love game, and a Djokovic hold took them to a tie-break.

Isner’s opening gambit was a 140mph bullet and he took a mini-break with a bold drop shot that even the nimble Djokovic could not pick up. He followed it with a 140 ace, and a double fault from Djokovic took it to 6-4. But they changed ends again at 6-6 before Isner took the initiative, hit a big forehand and followed it to the net for a put-away volley. This time he made no mistake, and served out the set, 9-7.

Just as in the first set, Isner was secure on his first service game but came under pressure in his second. Finally, a couple of 130-plus serves brought the hold, 2-2.

Come the eighth game, though, Isner made a couple of ill-timed advances to the net and found the ball returned at his feet: 0-30. A long baseline rally then went to the Serb for three break points, but Isner bravely went for his serves and picked off an overhead to level. Another vicious return gave Djokovic a fourth bite and this time he broke, 5-3. A big love service game and the match was all square, 6-3.

In the third set, the two men edged through to the seventh game, each of them now finding over 70 percent of their first serves and yielding very little quarter. But then Isner felt the full impact of the Djokovic return game to face break point. He saved it with an ace and then a 143mph delivery, came to the net, volleyed away a winner and held his 4-3 advantage.

The atmosphere was now buzzing as and they headed towards another tie-break climax. Isner took the tiniest of early advantages, 2-0, but a superb Djokovic lob onto the baseline levelled the score.

Again Isner inched ahead with a 143mph serve and a winning forehand down the line. In moments, and two more 140-plus serves later, Isner led 6-3 but now Djokovic’s serve came to the rescue—but not for long.

The crowd roared and roared and they got what they wanted: Isner’s 20th ace. This was a famous victory for the popular home man, his first against Djokovic and a guaranteed place in the top 10.

“I knew going into this year that I had the tools and game to beat those top guys,” said Isner afterwards. “It’s why I play this game, for moments like that [winning in front of a full stadium].

“College was instrumental in my success, made me a more well rounded person. I’ve always been a late bloomer – I’m 26 but I think my best is still ahead of me.”

As for the rain, it held off, as though done so by royal command, until precisely the moment of that last ace. Isner would have to wait some time to find out who his opponent would be in the final, for the Roger-and-Rafa show had to sit out the rain for who knew how long.

He would have to wait even longer to contest the doubles final, especially as he was lined up with Sam Querrey to face Nadal. It could be a long weekend in a not-so-hot and sunny Indian Wells.