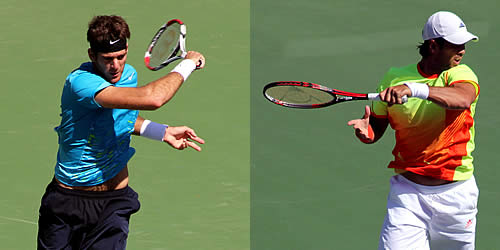 In a venue of deep indigo shadows and vibrant grassy highlights, the players have blended into their surroundings with their own variations of sky and sea, lapiz and navy.

Novak Djokovic may have favoured all white, Rafael Nadal might lift his look with the odd highlight of lime green, but this is proving to be the tournament of violets and blues, green and turquoise.

So when the bronze Fernando Verdasco strode out on Centre Court against Juan Martin del Potro to fight for a place in the last 16 at the BNP Paribas Open, it was like a shot of sunshine on an already hot day in the desert—tennis-ball yellow merging into tangerine and on into flame orange.

They were the colours of danger and of fire, a warning to his blue-clad opponent that he meant business.

For two men who both broke into the top 10 more than three years ago—Verdasco reaching No7 and del Potro No4—they had met remarkably few times. Two of those three rare encounters were last year and although the big Argentine won on the clay of Estoril, Verdasco scored a straight sets win on the hard courts of San Jose.

But del Potro, the younger man by five years, had spent much of last year gradually regaining the fitness and winning ways that took him to the US Open and the WTF titles in 2009 after losing much of 2010 with injury.

Now back to No9 and with 17 wins to four losses this year—three of those to Roger Federer in the quarters of the Australian Open, the Dubai semis and the Rotterdam final—he has begun to look increasingly like the Grand Slam winner of old.

However Verdasco, after slipping down the rankings during the course of 2011, has seemed to turn a corner this season, and last week broke back into the top-20 by reaching the finals in Acapulco.

Both men started slowly, easing through deuce games, testing the water, so to speak. But it did not take long for the heavy arm of del Potro to strike, he broke in the third game, and held his own serve with a bullet of a forehand down the line that drew admiring gasps from the crowd.

Verdasco then missed the baseline by a hair’s breadth to go down another break point in the fifth game and, with his serve going astray, went 1-4 down.

As if to rub salt into the wound, del Potro’s first serve climbed to 80 per cent. He even threw in the odd volley along the way—an improving element in the del Potro arsenal and a variation in his game that Verdasco has continued to lack despite so many years near the top of the game—and closed out the set, 6-2.

But Verdasco came into the second set with much more fire-power, answering the formidable del Potro forehand with his own huge lefty forehand to make a series of scorching winners. It gave him the chance of a break in the fourth game and he had del Potro all at sea with a nifty drop shot, only to fire an easy forehand into the net.

But the Spaniard kept up the aggressive tactics in a style that recalled his near victory over Rafael Nadal in Cincinnati last year, a three-and-a-half-hour, three-tie-breaker loss. Verdasco’s serve began to find its mark—and hit 130mph plus—to stay in contention, and he saved his best for last.

With del Potro serving at 4-5, the Spaniard’s defence—combined and a winning down-the-line forehand—took him to 40-0 and three set points. Del Potro, swinging his opponent from corner to corner, saved them all. Verdasco found two more jaw-dropping forehands to give himself another break chance but this time, his backhand found the net and del Potro held.

Serving at 5-5, Verdasco faced his own break point and also survived. It would, in the end, come down to forehands and nerves as they went head-to-head in a tie-break.

Point by point each advanced courtesy of forehand winners but it looked as though the decisive factor may be the speed with which Verdasco picked up the del Potro serve: It gave him the advantage at the key moment and the chance to serve for the set at 6-5.

But in the end, it was his own serve that proved fatal and a double fault handed match point to del Potro on the Argentine’s serve and, by chance, it was a del Potro backhand that won it.

The Argentine was gracious towards his opponent’s efforts: “Fernando played better than me the second set but I had some lucky moments and sometimes you need luck to win a match.”

In truth, the calm and consistent fire-power of del Potro held firmer at the key moments and, despite Verdasco’s forehand being the equal to the big Argentine’s for most of the second set, his backhand and his serve were not.

Del Potro might have expected to face Verdasco’s compatriot, David Ferrer, in the fourth round as the No5 seed has also been on a great run of form—three titles this season, the latest last week in Acapulco—but Ferrer made an unexpected exit to Denis Istomin.

It means that, if Federer can make it through the severe challenge of Milos Raonic, he and del Potro could eventually be heading for a fourth meeting this year in the quarter-finals.

As their last one went to two tie-breakers, the latest—should it come about—could be a cracker.

Indian Wells 2012: Sharapova, Azarenka in survival of the fittest