Marianne Bevis previews the men's draw at Indian Wells, where world No1 Novak Djokovic is looking to defend his crown 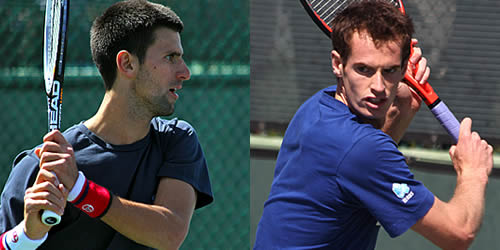 Andy Murray faced just once the man who was born within a week of him in the whole of 2009 and 2010.

That single match against Novak Djokovic was the final of the 2009 Miami Masters and it was the last time Murray beat his friend and rival until Djokovic retired injured in the final of last year’s Cincinnati Masters. Up to last week, that is.

For Murray has been knocking on the Serb’s door for a while. He almost brought the Djokovic 2011 run to an end at the Rome Masters. He almost pulled off a sensational win in a searing five-set battle in the semis of the Australian Open. Then last week, Murray did beat Djokovic in the semis of Dubai.

If the men’s draw of the BNP Paribas Open pans out as it should, therefore, this renewed rivalry could produce another gem of a semi-final. Such a scenario would also renew the long-standing rivalry of Roger Federer and Rafael Nadal, and in all their 28 matches, they have never met at Indian Wells.

Between them, three of these four men have won seven of the last eight titles at Indian Wells and two of them contested the final last year. Djokovic won a tight three-setter and rose to No2 in the world, and he and fellow finalist Nadal have held the top two spots ever since, switching positions at Wimbledon. But since Indian Wells 2011, they have contested six more finals, all in Masters or Grand Slams, and Djokovic has won them all.

So who among this huge Indian Wells draw of 96 can prevent these four from reaching their designated places? And can Federer and Murray stop the world Nos 1 and 2 from hogging the limelight again?

In truth, it’s hard to see anyone halting the Djokovic locomotive before the semi-finals. He may have fallen to Murray in Dubai, but the hot dry conditions there served to oil his match-play after a post-Melbourne layoff. And looking at him around the Indian Wells Tennis Garden, he could not look more relaxed and confident—joking with the crowd, playing football with his mates and walking with the bearing of a world No1.

He begins his title defence against qualifier Andrey Golubev, a hugely talented former No33 who seems to have lost his way in the last 12 months. Djokovic’s first seed should be the No29 winner of last week’s Delray Beach, Kevin Anderson, though Philipp Kohlschreiber, one place outside the seedings, is another flair player on a good day.

Talking of flair, the fourth round should bring Richard Gasquet or Florian Mayer, both with charismatic games that can penetrate the very best, but both victims of inconsistency.

Even Djokovic’s potential quarter-final opponent, No7 Tomas Berdych, has beaten him only once, at Wimbledon in 2010. All their remaining eight matches, all on hard courts, went to the Serb. Berdych also has to first negotiate Andy Roddick, who the home crowd will be hoping has a reversal of recent fortune. Roddick’s success on hard courts will at least work in his favour.

Murray has a very fine record in the American hard-court Masters: He has won at least one every year since 2008, but Indian Wells is the only one of them missing from his resume. He reached the final in 2009 but lost in the first round last year—though that means, if he wins this year and Federer falls far short of his 2011 semi-final finish, Murray will be snapping at the Swiss’s No3 heels again.

Ironically, he and Federer look to have the trickiest quarters to navigate. Murray’s first round is against a former No23 Guillermo Garcia-Lopez, though he is in something of a rut at the moment. Round 3 should hold No25 seed Viktor Troicki but the Serb must beat the teenage American star, Ryan Harrison, who reached the fourth round here last year. He was a semi-finalist in San Jose last month and took a set off Murray at the Australian Open. With crowd support and on a good day, he will be an early challenge.

The fourth round could bring an interesting match up with either Stan Wawrinka or Gilles Simon. Murray has had some very tough encounters with the former, going down in a dramatic four-setter at the 2010 US Open.

The bottom of Murray’s quarter could feature a fourth-round showdown between the top two Americans and Davis Cup mates, No8 Mardy Fish and No11 John Isner. The former, the 2008 Indian Wells finalist, usually finds his best on the American hard courts and now lives in Los Angeles. He would be a popular winner if he could take his first Masters here.

John Isner, standing at a career high, has only beaten Fish on clay, but he is improving with every month. Of course, he may first have to beat his famous record-breaking Wimbledon opponent, Nicolas Mahut.

Federer is one of only three men to win three Indian Wells titles: He did so back-to-back from 2004 to 2006. He has also twice reached the finals of the doubles—including last year. This year, he will watch Djokovic, Nadal and Murray play doubles from the tramlines, as he and Olympic/Davis Cup partner Wawrinka are the only men’s seeds not also playing doubles. Looking at Federer’s recent singles schedule that is not altogether surprising.

He has won four titles along the way, including Dubai last week. However the man at the top of his quarter is also on a winning streak. David Ferrer took back-to-back clay court crowns in Buenos Aires and Acapulco to regain the No5 ranking. Nevertheless, in all 12 meetings through their 10-year history, Federer has not lost: indeed he has dropped only three sets to Ferrer.

There are other pitfalls for Federer before that quarter-final and, as it happens, he could face the other two men at the top of the win-loss stats in 2012. The 27th-ranked Milos Raonic, a possible third-round opponent, has reached the final in three of his four tournaments this season, winning in Chennai and San Jose. In Ferrer’s section is No 9 Juan Martin del Potro who recently won the Marseille title and was the losing finalist to Federer in Rotterdam.

Federer’s eighth also includes Jurgen Melzer, who beat some big hitters, including Raonic and Isner, to win in Memphis last month. The Austrian will first face Gael Monfils, the finalist in Montpellier and Doha.

So it’s a formidable line-up, and that’s all before Federer has a chance to play his nemesis in the semis.

Finally to Nadal, returning to the tour after his marathon final against eventual champion Djokovic at the Australian Open.

Nadal’s path looks pretty straightforward all the way to quarters. His first potential seed is No26 Marcel Granollers, whose wins have largely come on clay. He is followed by another Spaniard, Feliciano Lopez—who Nadal beat with ease in last year’s Miami Masters and this year’s Australian Open—or the talent of Alexandr Dolgopolov, who Nadal beat for the loss of just three games in Miami last year.

There’s no question that Dolgopolov can turn on the heat, but he has struggled to do so since losing to Murray in the Brisbane final in the first week of 2012.

And so to that quarter-final test. Nadal lost to Jo-Wilfried Tsonga twice last year, though on both occasions the Spaniard was lacking his usual bite due to fatigue. But Tsonga is on a good run of form, briefly breaking the top five for the first time a fortnight ago. He faces an array of men who could test him, though: Michael Llodra, Radek Stepanek, David Nalbandian and Bernard Tomic among them.