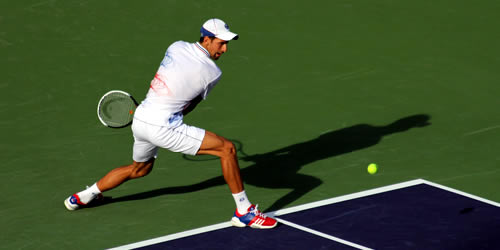 With all 32 seeds enjoying a bye to the second round of the BNP Paribas Open, and the male of the species taking to court a day later than the female, the big guns of the men’s singles draw did not fire up at Indian Wells until days after the gates opened to the tennis world.

With only one of the top-ranked men absent—Robin Soderling still suffering from glandular fever—it means that the tournament’s first Saturday is one of the hottest tickets in California, with both day and night sessions sold out long ago.

For alongside the first swath of men’s seeds was a second wave of women’s seeds that included three former BNP Paribas Open champions, all of them former World No1s and all of them with a huge popular following: Caroline Wozniacki, Maria Sharapova and Ana Ivanovic.

Even away from Centre Court, there was enough to satisfy even the most jaded palate. No16 Richard Gasquet found Spaniard Albert Ramos, ranked 57 but on a gradual upward trajectory, a real handful and after winning the first set, he lost the second 7-5 and the match, 6-1.

He was narrowly beaten to the seeds’ exit gate by fellow Frenchman, No32 Julian Benneteau, and it looked as though No13 Gilles Simon may make it three in a row when he lost a second set tie-breaker to Dudi Sela and went a break down in the third. He saved France’s blushes with a 6-4 final set.

While the French drama unfolded, the big-serving home boy, John Isner, at a career-high No11, had advanced before Nos7 and 8 Tomas Berdych and Mardy Fish even took to court. Later in the afternoon, Fish would seal a speedy win to keep alive the prospect of a fourth-round meeting with that American who is hot on his heels in the rankings.

But the biggest interest was reserved for the show court schedule, a show-stopper of a day.

Ivanovic, done and dusted in an impressive hour, made way for popular American Andy Roddick who has just dropped from the top 30 for the first time since August 2001.

Roddick, the losing finalist in 2010, was forced to retire from the Australian Open with injury but has been returning to fitness via quarter-final places at San Jose and Delray Beach. However, he was up against Poland’s Lukasz Kubot who beat him in their only previous meeting and who scored an easy first-round win over Ivo Karlovic.

Roddick did not get off to a great start, losing the first set and getting broken in the second in the ninth game. But Roddick drew on the cheering home crowd to break Kubot back to love to save the match, and then led 5-1 in the tie-break before finally serving it out 7-5.

It spelled just the comeback that everyone hoped for, a victory—6-4 in the final set—and it was a similar story for No7 Berdych, mounting his own comeback from a set down against Sergiy Stakhovsky. The two seeds will face each other in what could be a cracker of a third round match. Roddick admitted that, on current form, Berdych has the edge: “He’s a better player than me at the moment.”

The star of Saturday afternoon, however, was defending champion and world No1 Novak Djokovic. He was playing qualifier Andrey Golubev who he beat in a bare hour in their only previous meeting, in this very tournament, one year ago.

By the time he took centre stage, the conditions were beginning to cool down as the first clouds of the week drifted on a light breeze to fill in the stretching shadows.

That the conditions were different from those in his previous day’s doubles mattered little. Djokovic broke in the fourth game and, although Golubev broke back in the seventh, Djokovic quickly broke again and held for a 6-3 set. The second set was even more straightforward: An early break and then a second break in the seventh game closed out the match 6-2.

It was perhaps not the quality of tennis that many had hoped for and it certainly did not have the drama of a close contest like that of Juan Monaco’s over Nicolas Mahut, Stan Wawrinka’s over Robbie Ginepri and Nicolas Almagro’s over Sam Querrey. Each seed survived three sets.

As Djokovic was the first to admit: “We didn’t play a beautiful match.” But he didn’t need to and, although he will next face a fresh Kevin Anderson who received a walkover in his second match, Djokovic knows that the other seeds in his section—Florian Mayer and Richard Gasquet—have already gone. His quarter-final place looks assured.

It would be many more hours before Andy Murray’s progress was known. The No4 seed, buoyed up by the confidence of 31 wins from his last 35 matches, faced Spain’s Guillermo Garcia-Lopez in the knowledge that he had won both their previous meetings.

But Murray would have to put his foot down on the accelerator to win the competition for the shortest completed match thus far. That honour currently goes to Sam Stosur’s 49-minute dismissal of wild-card Irina Falconi.

The Australian’s segment of the draw has also lost the next highest ranked player, Sabine Lisicki, making Stosur as good a bet for a place in the quarter-finals as her fellow US Open champion, Djokovic.