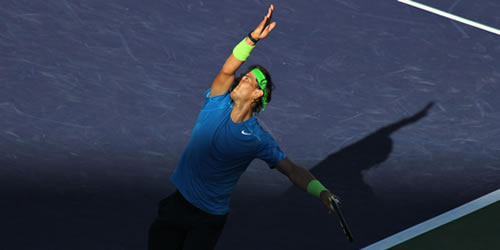 The top three men in the world, all former Indian Wells champions, promised one of the finest afternoon schedules that money could buy when they appeared, in strict ranking order, on the centre stage of the BNP Paribas Open.

Novak Djokovic opened the fourth-round proceedings against Pablo Andujar and Roger Federer closed them against Thomaz Bellucci. With neither man playing a seed, neither was expected to have too many problems getting the better of their opponents.

Sandwiched between the two—and straight after an inspired but one-sided women’s contest between a dominant Victoria Azarenka and a hapless Agnieszka Radwanska—came what many both hoped and expected would be the feature match of the day between Rafael Nadal and the No21 seed Alexandr Dolgopolov.

Anyone who saw how close the unconventional game of the Ukrainian came to piercing Novak Djokovic’s best in the fourth round of the US Open—finally losing the first set tie breaker, 14-16—would understand the anticipation.

For while Nadal had defeated him in their two previous meetings, they had not met in almost a year, and Nadal knew he could face anything from a player who can make outrageous winners and alarming errors from almost any position on the court.

“He’s a crazy player because you can expect everything. He can play really aggressive, he can play very fast, he has a very good serve…I have to play long to make him hit the balls in more difficult positions. That’s what I have to do, but I know he can hit a winner from every place on the court.”

But whether it was down to his long previous matches—two hours 20 minutes against Marcos Baghdatis and two hours 45 minutes against Steve Darcis—or simply the quality of Nadal’s game, Dolgopolov’s error-strewn performance barely troubled the Spaniard at all.

The Ukrainian was broken in his opening service game and Nadal retained that advantage to take the first set 6-3. There were flashes of brilliance along the way—a brilliant drop-shot and lob combo that left Nadal on his back, and two forehand winners out of the top drawer to gain two break points at 3-5—but with each break point earned, a wayward strike threw it away.

The opening of the second set looked like it might burst into life as Dolgopolov brought Nadal under pressure but once more he made a string of errors to hand an easy break to Nadal in the third game, 2-1.

And so it continued: occasional flashes of near genius—air-bound and off-balance—interwoven with huge numbers of overhit and misjudged shots. And with his first serve percentage plummeting to 26, there was only going to be one result.

Dolgopolov did not win another game until the seventh of the set, briefly threatened again to break back at the last hurdle, but 75 minutes closed out the match, 6-2.

So the excitement on this sultry afternoon, it turned out, was to come from the No1 and 2 seeds.

The 45-ranked Andujar, already further in this event than at any previous Masters, looked like his stay would be very short indeed as Djokovic took the first set 6-0. But in the second set, Djokovic found himself saving seven break points and two set points before Andujar levelled the match in a tie-break.

Djokovic, though, quickly recovered his focus with an opening break in the third set and, after resisting one more break point in the sixth, he broke Andujar again to serve out the match to love.

More surprising, though, is that Djokovic will now meet the clay-court specialist Nicolas Almagro, who beat No7 Tomas Berdych 6-4, 6-0, to reach the quarter-finals here for the first time.

But if the Centre Court crowd thought they could sit back and relax for the final match of the afternoon, they were quickly disabused. Federer was facing, for the third straight match, a man he had never played before. Not only that, he was coming off the back of a three-set test just the night before from Milos Raonic. As Federer pointed out after that one: “It’s a quick turn of events to go from night session to day session, from a righty to a lefty, from a big server to a baseliner.”

In the event, the No50-ranked Brazilian was not entirely a standard clay-court baseliner but a big serving, aggressive, rangy player who showed more than a passing willingness to attack the net and exchange powerful forehands with Federer. A look at his run on the fast clay of Madrid last year showed his potential: He beat Andy Murray and Berdych in straight sets and led Djokovic by a set and a break in the semis.

Even so, when he broke Federer in the third game, it was unexpected, and his own serve never came close to being broken. Coming through the court at over 130mph, and from that long left arm, Federer could not handle the returns.

Nor could he contain, in the eighth game, the returns of his own serve back at his feet, and a pair of backhands into the net gave Bellucci another break chance, which he took. The first set went to the Brazilian, 6-3.

Much as he had done in the second set against Raonic, Federer then began to pick up the Bellucci rhythm, and played his forehand wide to the Brazilian’s backhand. It drew enough errors to break the opening game but Bellucci was going nowhere. Despite earning another chance to break in the fifth, Federer failed to convert. The match looked on a knife-edge—either Federer would find his range and rhythm or Bellucci would capitalise on the Federer errors before he found his groove.

When Federer failed to convert three more break points in the seventh game, it felt like the former, but with a strong service game taking him to 5-3, Federer pounced. Facing one more break point, Bellucci attacked the net, Federer defended from well behind the baseline and eventually put up a high backhand lob on the run—and it took the set.

Even in the third set, Bellucci did not back off from his aggressive game plan.

Twice he went 15-30 down but held and then, at 4-4, Federer went down 0-30 and the crowd roared, sensing a breakthrough. It was now, with precision Swiss timing, that Federer delivered four unreturnable serves to hold and then earned his first break chance of the set. It took him two attempts, but the set and a quarter-final place were his, 6-4.

It is tempting to again highlight the Nadal quarter-final as the one to watch, for he will face the unseeded David Nalbandian who, in beating No6 Jo-Wilfried Tsonga from a set down, has now beaten three seeds in a row.

The creative game of Nalbandian has been repeatedly blighted by injury over the years but he is one of the few men who has made inroads against Nadal. And in their last two Masters matches, in Miami and here in Indian Wells, he took the opening set.

Nadal paid his opponent’s “unbelievable talent” the highest of compliments: “He’s the kind of player that when he’s playing well he’s the best player in the world.” The Argentine’s problem is that Nadal has so far lost only 14 games in three matches. He has lost 44 in four matches—and he is playing a Nadal who looks in as good shape as he has done in months.

So the best match of the quarters may, again, be elsewhere, and may again be in the hands of Federer. He faces No9 Juan Martin del Potro in their fourth straight tournament this year, and that will certainly be worth the price of entry.