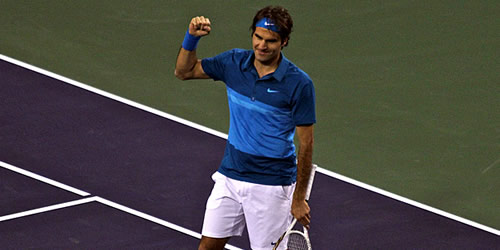 They had to bide their time. Roger Federer and Rafael Nadal may have all the star appeal, all the fan appeal and one of the sporting rivalries of the decade, but even they had to sit and watch the rain pour down before playing each other for a 28th time.

It seemed only right, for it gave time enough for America’s new hero to bask, metaphorically at least, in the sun.

In the event, it was three hours before the second pair of protagonists would lock horns in Indian Wells’ semi-finals—their first meeting here in eight years of competition. Indeed this would be only their fourth meeting on US soil and the first outside Miami.

Despite never facing one another here before, they both brought outstanding records to Indian Wells. Federer had three titles and was appearing in the semis for the seventh time in nine years. Nadal was the only player to reach the semis or better in his last seven appearances here, winning twice. He also won the doubles in 2010 and is in the doubles final again this year.

And there was another interesting back-story for Federer. The No3 seed had lost only two matches since the US Open, a run of 37 wins to two losses that took in five titles, but one of those losses was to Isner in last month’s Davis Cup and the other was to Nadal in the semis of the Australian Open. He now had to return the favour to both on consecutive days.

By a little after 5pm, then, the cool, damp stage was set—beneath floodlights and bruise-purple clouds—for one of this tournament’s most hoped for match-ups.

Federer opened serve and promptly faced two break points but saved the situation with a couple of big serves. He quickly turned the pressure on Nadal, twice rushing the net for a volley put-away. At deuce, the Swiss made a backhand volley winner and converted his first break point with another.

Nadal finally got on the scoreboard with a love game in the fourth, applying the tried and tested tactic of firing wide to Federer’s backhand.

Nadal was also starting to read the Federer serve—no free points here as he had done so readily against del Potro. Federer was having to rally almost every point which gave Nadal the room to build a baseline rhythm, and he broke back in the fifth.

Come the seventh game, and Federer spearheaded his strongest hold of serve with a first ace and, as the wind began to whip up, he went on the offensive. The Federer backhand has often proved to be vulnerable to the left-handed top-spin swerve of Nadal, but Federer of late has developed a stronger, more aggressive response on that wing.

It was particularly noticeable 18 months back when he unleashed it first on Novak Djokovic and then on Nadal on the indoor courts of the World Tour Finals, a tactic he repeated to devastating effect on Nadal last November.

And the tactic came to the fore in the cool, lower-bouncing conditions of Indian Wells’ Centre Court. It was, indeed, an area that Nadal later identified as a key factor in the result: “Here is a place that the ball has high bounces with normal conditions: hot. But today was colder, the ball stays lower and that makes the match a little bit more comfortable for him.”

In the eighth game, a Federer backhand winner was followed by a volley attack, then a chipped backhand return and finally a cross-court backhand winner to earn another break point. Nadal forced a forehand long to go down 3-5 and Federer rounded off a love service game with a drop-shot winner to take the set.

By now, the wind was high and the temperature plummeting. Nadal opened the second set with a love service game but then, at 30-15 on Federer’s serve, rain joined the already demanding elements, and the two men sank into their chairs with towels wrapped around their shoulders. But it was too cold to sit around for long and, after some consultation with the umpire, they continued to play.

Federer certainly seemed to be less affected by the wind than Nadal—helped perhaps by taking the ball early and finishing off points at the net when possible. With four clean strikes through the court to the baseline corners, he broke Nadal to love and sealed a 3-1 lead with a one-two punch of serve backed up by a cross-court winner.

When points did extend into longer rallies, Federer more and more plied the Nadal backhand with his own forehand. The tactic brought up another break point in the seventh game and a 5-2 lead for the Swiss.

But in such unpredictable and challenging conditions, a break of serve guaranteed nothing. Nadal immediately broke back, narrowed the gap to 5-4, and promptly went off court at the change of ends to leave Federer pondering one lost chance and one more chance to come.

A double fault did not help his cause, but Federer recovered to lead 40-30, only for rain to delay the playing of match point. But against the odds, minutes later both men strode to their baselines, Federer served an ace and the match was over.

The last time Federer beat Nadal outdoors was almost three years ago in Madrid: His only wins in the interim came on that fast, low-bouncing indoor court at the World Tour Finals in London.

He afterwards admitted that he was surprised he had come so far in this tournament, particularly after his early illness.

And he was more than pleased with how he is feeling: “It’s nice that I’m putting together such a lot of wins in a row at the moment and that I’ve shown such a great reaction after the tough loss to Djokovic at the US Open. I’m very happy with my game and happy that my body’s holding up and mentally I’m still fresh.”

So that’s one of his losses since New York avenged and one still to go. Should he manage that, too, he will draw level with Nadal at the top of the Masters title leader board: a double whammy if ever there was one.