Roger Federer breezes to his 250th Masters win, with a straight-sets victory over Juan Martin del Porto 6-3 6-2 in 89 minutes 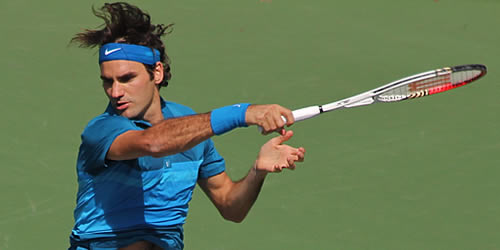 Roger Federer will face Rafael Nadal for a place in the final Photo: Marianne Bevis

It has become, for the moment at least, the rivalry of 2012. Wherever the paths of Roger Federer and Juan Martin del Potro have crossed, they have ended up on opposite sides of the net.

In January, it was the heat of the Australian Open quarter-finals. In February, it was the cool indoors of the Rotterdam final. They both quickly made the adjustment to a baking Dubai in their closest match of the three: two tie-breakers in the semi-finals.

And when the draw for the first Masters of the year—the BNP Paribas Open at Indian Wells—was made, there it was again. For, with respect to the other seeds in Federer’s quarter, the favourite to advance to another meeting with the No3 seed was del Potro.

In truth, neither man made trouble-free progress to their pre-ordained meeting. Federer, nursing a fever, looked lack-lustre in his opener against teenage wild card, Denis Kudla.

He looked considerably fitter in his second match but, playing the biggest server in the tournament and the fastest improver in 2012, No27 seed Milos Raonic, it took Federer a lost first tie-breaker before he read his new opponent and took the next two sets.

He admitted to having problems with the adjustment to his third opponent, too—the left-handed Thomaz Bellucci. Again he went a set down before finding his rhythm.

Del Potro seemed on top of things until his fourth-round match against Denis Istomin, a man who had already taken out two seeds, including No5 David Ferrer, before taking del Potro at a tie-break set apiece. Two-and-three-quarter hours later, the Argentine No9 took the win, 6-2.

But back to those three 2012 meetings. All three had gone Federer’s way as the Swiss built a six-month swing of 36 wins from 38 matches. But as Federer pointed out in Rotterdam, he and del Potro “have history”. The Argentine’s two wins over him included the US Open final and the World Tour Finals in 2009, and the former world No4 subsequently missed most of 2010 with a wrist injury and much of 2011 in reclaiming his fitness and winning ways.

So with del Potro running Federer close in Dubai just two weeks ago, this promised much, but it started tentatively.

Federer was unable to find a first serve until the sixth point of the first game, striking two forehands long and pushing a backhand into the net to offer up a first break point. A poorly timed net approach gave del Potro a second opportunity but, as the clock moved past 10 minutes, an edgy game became even more tense when del Potro challenged a Federer serve but the Hawkeye technology failed.

The advantage went to the server and the Argentine was desperately unhappy.

The hiatus gave the momentum to Federer, who finally held serve, and a still-upset del Potro went 0-40 down on his own serve. The Swiss played the first of what became a point-winning tactic throughout the match—a drop-shot followed up with a put-away winner.

Not until the fourth game did del Potro get on the board with a clean hold of serve but Federer had the wind in his sails. He came to the net when possible and his initially dire first-serve performance crept upwards.

The big man from Argentina gradually regained his composure and twice held serve to love, even scoring from a Federer-like drop-shot and lob combination.

It was with a certain sense of irony that Federer turned to Hawkeye when serving for the set, especially as it showed the serve in question to be in. As if to rub salt into the wound, Federer sealed the set with an ace—his seventh. Del Potro had produced not one in four service games and 37 minutes.

It got worse—or better from Federer’s point of view. Whether it was the heat of the afternoon—this was Federer’s first match in the full sun—or simply that he was finding his feet on these courts after missing some of his practice sessions, his timing, range and pace were significantly better than in his earlier matches.

Del Potro went 0-40 down and a Federer cross-court winner took an immediate break. Time and again, he worked the big man wide on the forehand wing before firing a winner into the open court.

And although the Federer first serve was still not up to 60 percent, del Potro failed over and over to return it with any impact, apparently baffled by the variety, spin and placement.

Just as in the first set, Del Potro began to hold serve more strongly after his initial break, but Federer constantly kept him off balance on his own serve. The fourth game, as a sample, zipped by to love with an ace, a drop shot, a smash, and an unreturnable serve. In the fifth, on the del Potro serve, Federer chipped the return of serve, chipped a backhand volley down the line, and fired a backhand cross-court drive to break to love: 4-1.

Three aces and a serve-and-volley winner later, it was 5-1. Serving at 5-2, he was in danger of being almost too casual, and del Potro pulled him back from 40-15 to deuce and then earned his first break point of the set. A Federer smash saved it and a 13th ace finished the match, 6-2. Still del Potro had managed not one ace and he won only half the points on his serve in the entire second set.

So perhaps it was not the contest that their history predicted. That was down, in part, to del Potro struggling with his form: “Roger played better than me. I couldn’t be focused during all the match. I don’t feel comfortable playing the match. But was my problem. Roger made his job and he’s a good winner.”

It was also down in part to Federer beginning to feel more at home in Indian Wells after rather less ground work than he may have liked and three straight matches against men he had never played before.

Today, though, he felt comfortable: “I sort of expected myself to come out and play a good match today after the struggle I had against Bellucci. I don’t usually struggle back to back days so this was for me a really good match against a great player.”

It was also another landmark match—his 250th Masters match-win—and it took him to the BNP Paribas Open semi-finals for the seventh time in nine years and a 28th meeting against Rafael Nadal, though their first at Indian Wells.

For Nadal it was who again won the repeat playing of the stirring 2009 battle here against David Nalbandian. On this occasion, just as three years ago, the Argentine took the first set and looked poised to beat Nadal, especially when he worked two break-point chances on Nadal’s opening serve in the second set.

The Spaniard survived that threat and then survived 30-30 when serving at 4-5 to save the match. Having done so, he promptly broke Nalbandian in the next game and served out the set, 7-5.

Nadal looked as though he would close out the match as quickly as he had their 2009 meeting but, serving at 5-2, Nalbandian hit back to close the score to 4-5 and his drop-shot-lob tactic from the first set brought up two more break points.

He will have nightmares about the first, a dreadful drop-shot attempt into the net, and probably more about the winning drop-shot that sealed the match for Nadal.

It was close but, once again, no cigar. However, in the end, that is probably what most people at Indian Wells hoped. For now they have their blockbuster semi between two of the greatest rivals of the current era.

The Roger-and-Rafa show will follow the first semi-final between world No1 Novak Djokovic and No11, John Isner, who is aiming to reach his first Masters final.