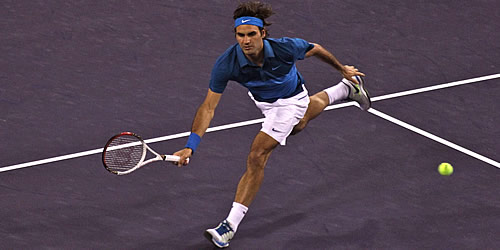 Precisely 48 hours after embarking on his campaign for a fourth BNP Paribas Open title at Indian Wells, Roger Federer faced what promised to be an altogether more difficult impediment to his ambitions.

In his opening round, he had taken on the teenage wild card Denis Kudla, feeling below par but still winning in less than an hour. Now perhaps wishing he had a few more practice and match hours under his feet, he had to tackle one of the most successful players on the tour this year.

Of course Federer has been enjoying a great run dating back to last autumn: an unbeaten indoor season, five titles since losing in the semis of the US Open, and 17 wins from 19 matches this year.

A look at the ATP’s serving stats for the year may also have given Federer pause for thought. No slouch in that department himself, he nevertheless came second to Raonic in service games won and third to Raonic on first serve points won. And in the aces department, no-one comes close: Raonic 278, Isner next with 218, Federer down at 131.

All the more satisfying, then, that Federer opened serve to love, but Raonic opened with a 132mph ace and finished with second serve ace, which made one thing crystal clear. Federer would have to serve at his best and he would have to take any break point chance at the first time of asking.

In the event, Federer was not offered a single break point in the first set, though he faced and saved one of his own in the fifth game.

By mid-set, Raonic’s delivery had touched 140mph and he had not dropped a single point on his first serve. In fairness, Federer was serving to a high standard, too—with a precision and placement that Raonic found hard to read—and his second-serve success rate was the better of the two men.

The set had to be decided by a tie-break which Federer opened with his biggest serve—127mph—but that was followed by a 142 reply from Raonic and the Canadian played a flawless game to take the set, 7 points to 4.

Federer admitted afterwards that he had needed the whole of the opening set to get a read on the Raonic serve—this was, after all, the first time they had met. Having done so, he worked a quick break point in the opening game of the second set and took it with a forehand down the line.

Raonic could not get the same read on the more varied and disguised Federer serve and as a result, the Swiss matched the Canadian ace for ace—by now six apiece—and held for a 2-0 advantage.

By the fifth game, Federer was matching Raonic on points won on his first serve, as well, but it was his return game that began to yield the most success. He earned three more break points and converted the third for a 4-1 lead.

Federer very nearly handed one break back in the sixth but fought off two break points with his signature wide serve finished with a forehand winning put-away. He took the set 6-2.

The final set was as finely balanced as the first until the seventh game when Federer saw the vital opening, a single break point. He chipped back a 136mph serve that brought Raonic to the net and then passed him down the line with backhand winner. That was all he needed: Minutes later he served out the set, 6-4.

Federer may have lacked the mph of Raonic’s deliveries but he matched the Canadian’s 10 aces and dropped only six points on his first serve compared with Raonic’s 13—and none at all in the final set.

He was, though, quick to acknowledge the “very impressive” talent of Raonic, tipping him for top-10 status before very long.

Federer also admitted that he was one of the lucky ones this week in terms of his health: “I’m feeling a little better if still not 100 per cent.”

He later elaborated: “I’m happy that I did play the tournament. I got kind of what I hoped for with a good match with Kudla—played actually really good under the circumstances—I’m surprised. And then a day off and playing Raonic who I knew was going to keep the points short. And now I’m into the tournament I feel a bit better.”

The ill fortune of some of his colleagues also means that Federer next meets another man he has not played before. Thomaz Bellucci beat the No20 seed Jurgen Melzer who subsequently withdrew from the doubles with illness. He then had a walkover in Round 3 when Nikolay Davydenko pulled out ill. The Russian himself had previously played a lucky loser who took the place of the sick Gael Monfils.

As Federer outlined, Bellucci is a wholly different package from Raonic: “Obviously it’s a quick turn of events to go from night session to day session, from a righty to a lefty, from a big server to a base-liner. It’s different. I hope to feel better again tomorrow so I will be able to last through long rallies.”

If he does, there is every chance that Federer will meet, for the fourth time this year, the powerful Juan Martin del Potro—certainly a quarter-final to relish.