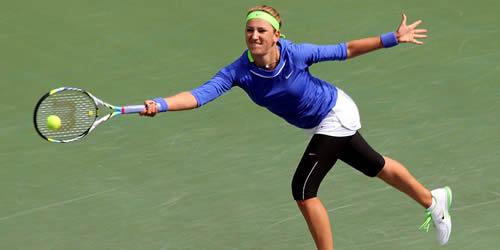 Victoria Azarenka secured her fourth title of 2012 with a straightforward 6-2 6-3 victory over Maria Sharapova in the Indian Wells final on Sunday.

The world No1, whose 23-game winning streak is the best start to a season since Martina Hingis claimed 37 successive victories in 1997, disposed of her Russian opponent in just 85 minutes.

“I never dreamed about that [breaking Hingis’ record]. It is amazing,” said Azarenka afterwards. “I am so glad I am able to be consistent, disciplined and professional every day.”

Azarenka made a blistering start to the final and broke Sharapova in the opening game, before holding serve to edge into a 2-0 lead.

Sharapova briefly fought back and saved three break points, but Azarenka, competing in her sixth successive tour final, capitalised on the Russian’s error-strewn performance to take the first set in 39 minutes.

The battle between the world’s top two players heated up in the second set, and they traded breaks as both struggled to cope with the blustery conditions.

But at 3-5, and serving to stay in the match, Sharapova over-hit a lob to hand Azarenka a straight-sets victory.

It was the second time Azarenka had triumphed over the world No2 in six weeks after the 22-year-old beat Sharapova 6-3 6-0 in the Australian Open final in January.

“I was just trying to do my best because I know Maria is fighting,” Azarenka added. “I always try to stay focused and apply as much pressure as I can.”