Marianne Bevis takes a look at the Women's draw at Indian Wells, where Anne Keothavong and Elena Baltacha are in action 2012 has been the year of Victoria Azarenka. The tall, 22-year-old Belarusian, who has knocked at the door of the top of the women’s game for so long, finally fulfilled all her rangy talent by taking the No1 ranking along with her first Grand Slam title at the Australian Open.

Since then, she has cemented her ranking with a yet-to-be-broken 2012 run of 17 wins for no losses. It’s a run that represents three titles in row: Sydney before Melbourne and Doha since. What’s more, she ended 2011 with two final finishes in Luxembourg and at the WTA Championships.

And if anything, the Azarenka form is still improving—along with an almost tangible confidence. In Doha, she lost just 18 games in five matches, so she comes to Indian Wells as many people’s favourite to take the title that has yet to feature amongst her tally of 11.

It is not the most auspicious outlook, then, for the two British women who have made it to the main draw this week: Both Anne Keothavong, ranked 77, and Elena Baltacha, No62, are in the top eighth of the draw.

Keothavong could meet Azarenka in the third round but, although she has a good chance of beating Swiss outsider Timea Bacsinszky in the first round, she has to overcome the formidable No25 seed, Svetlana Kuznetsova, in the second.

Baltacha also has a good chance of winning her opener against Dutch No90, Arantxa Rus, who has yet to win a main-draw match this year. However, Round Two holds top-15 debutant, Julia Goerges, who reached the final in Dubai last week.

The other two members of the British Fed Cup squad that made such an impression last month—the young duo of Heather Watson and Laura Robson—failed to make it through qualifying.

Azarenka is scheduled to meet another form player in the slight and creative package of Agnieszka Radwanska in the quarters. The Pole is at a career-high ranking of No5 and comes to Indian Wells on the back of the Dubai title. 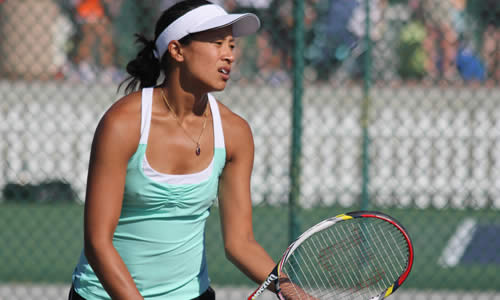 She went deep in all the tournaments before that, too, but sadly for her, she faced and was beaten by Azarenka in all of them: the quarters at the Australian Open and the semis in Sydney and Doha.

Azarenka’s best run at this tournament was her semi-final finish in 2009, when she lost to eventual champion Vera Zvonareva.

She could play the No9 seed again in the semis this year, but the Russian’s quarter includes two reigning Grand Slam champions—Wimbledon winner Petra Kvitova, and Roland Garros champion, Li Na, plus a possible third-round contest against two-time Indian Wells champion, Daniela Hantuchova.

The experienced Hantuchova has played a lot of tennis this season but has won a lot of matches too: She reached the final in Brisbane and won in Pattaya City. So the woman who reached a high of No8 all of 10 years ago continues her steady climb back up the rankings.

Defending champion and No4 seed, Caroline Wozniacki, will be aiming for a third straight final here but will have to beat two other former champions, Ana Ivanovic in the fourth round and Maria Sharapova in the semi-finals.

She beat Ivanovic two weeks ago in the Dubai quarters and Sharapova at Indian Wells last year—though subsequently lost to the Russian in Rome. Wozniacki beat her possible quarter-final opponent, Marion Bartoli, the last time they met—also in last year’s Indian Wells.

No2 Sharapova has played only three matches since reaching the Australian Open final, and one of those was in the Fed Cup. The bottom segment of her draw looks straightforward enough but her quarter-final throws up either US Open champion Samantha Stosur or the constantly improving Sabine Lisicki.

The German’s career continues to be blighted by either illness or injury—she has missed three tournaments so far this year. But when fully fit, she boasts the kind of power and variety of stroke that could take her into the quarters and a repeat of the Australian Open meeting with Sharapova that went to three sets.

Elsewhere in the women’s draw, there is only one top-10 player missing, world No10 Andrea Petkovic, who hasn’t played since Australia due to a back injury. However, another unfortunate absentee is Kim Clijsters, twice a winner here but withdrawn because of an ankle injury sustained at the Australian Open. With retirement looming, this was her last chance to regain the title.

Top half: Azarenka beats Radwanska and Kvitova beats Hantuchova for a standout semi between two women reaching the top of their game—and their last two meetings at Wimbledon and the WTA Championships both went the distance—and to Kvitova.

Bottom half: Wozniacki beats Bartoli and Sharapova beats Lisicki to take the No2 and 4 seeds back onto the hard courts where Wozniacki has come off the better in their last two meetings.