Marianne Bevis looks back on the first half of the tennis calendar's 'fifth Grand Slam', the Indian Wells Masters

The women are down to the last eight, the men to the last 16—perhaps the tennis fan’s best stage of a tournament.

There are top-class contests from 11 in the morning to 11 at night and, if it were only possible to be in two places at once, there could be even more.

On the men’s side, all eight fourth-round matches of the BNP Paribas Open are played in one day at the Indian Wells Tennis Garden, with the four players who have won the last 28 Grand Slam titles all on Centre Court and in ranking order: Novak Djokovic, Rafael Nadal, Roger Federer and Juan Martin del Potro.

On what other day would the charismatic match-up of Jo-Wilfried Tsonga and David Nalbandian be relegated to the second stadium, along with the American No1, John Isner and the world No7 Tomas Berdych?

The continuing story of Azarenka and Radwanska

In the women’s draw, all eight of the remaining contenders are seeded in the top 20 with five of them in the top eight, and three of them have enjoyed world No1 status.

What promised to be the women’s match of the quarters took pride of place as the second match of wonderful Wednesday, sandwiched between the top two men in the world. 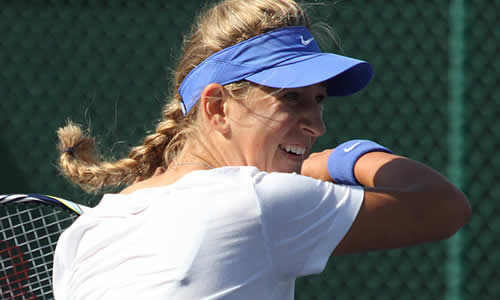 Victoria Azarenka and Agnieszka Radwanska, two of only three WTA title winners so far in 2012 and both with 20 match wins to their names, met for the fourth time this year.

The difference was, Azarenka had still to lose in 2012, having won the titles at the Australian Open, Sydney and Doha, and she beat Radwanska in all three of them. And the gap, with each passing month, seems to widen. This match proved to be the most dominant display yet, a ruthless 6-0, 6-2 pounding.

Despite Petra Kvitova’s early exit from Indian Wells, she will remain in spot No3 behind Azarenka and Maria Sharapova. However, the loss of defending champion Caroline Wozniacki to the resurgent former champion, Ana Ivanovic, will take her outside the top five for the first time since 2009.

In her place in the top four will be Radwanska, reaching a career-high, at No4, for the second month in a row.

Another member of the increasingly impressive German club, Angelique Kerber, is the third woman with a 2012 title to her name and continues her upward progress after her impressive semi-final showing at the US Open. She will reach at least 18 and may break the top 15 with a semi-final final finish here.

No fewer than six unseeded men tried to take their chance against the odds in the men’s last 16. Perhaps the one with the best chance was young American Ryan Harrison against No13 Gilles Simon.

Nalbandian has the wherewithal to beat Tsonga but probably not after his two gruelling matches against No24 Marin Cilic and No10 Janko Tipsarevic.

As for Pablo Andujar against Djokovic, the Spaniard looked for the positives: “He’s world No1, so I have nothing to lose.” After losing the first set 6-0, it looked a hopeless cause, but he took an impressive second set tie-breaker before Djokovic reasserted his dominance in the third.

Prize for most terrifying warm-up

Marion Bartoli plays every match like a prize-fighter, jigging and ghost-hitting between each point, punching above her 5ft 6ins and, point by point, improving her ranking after 12 years on the tour. But jaws were dropping alongside her practice court where, less than an hour before her 6-0, 6-2 demolition of Chanelle Scheepers, Bartoli was working through a brutal warm-up with feet bound to the fence with bungees. She continues to deserve every win that comes her way. 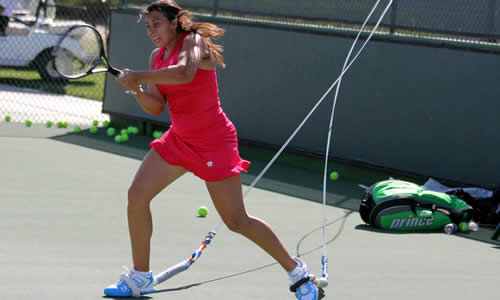 There is a proliferation of blue wherever you look in this tennis oasis—from Azarenka to Sharapova, del Potro to Federer, Nadal to Ivanovic.

So when Fernando Verdasco strode out onto Centre Court against del Potro, it was like a blaze of sunshine: tennis ball yellow shot through with fiery orange and red. Even his shoes looked ready to burn up the court—except that, unfortunately for him, the temperate blues of del Potro proved to be the stronger. 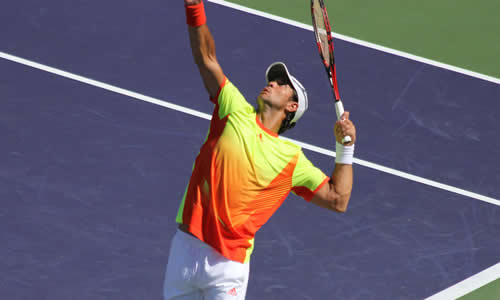 In their own words…

Facing Federer: The huge talent of Milos Raonic is arguably the fastest improving player on the men’s tour. He faced Federer for the first time in his career in the third round and showed that he not only has one of the most feared serves in the business but the composure and self-belief to back it up.

He took the first set in a tie-break before losing the match, but felt he had learned a lot about Federer’s game: “I think the best way to describe it is he has that efficiency. I’m not talking about with energy, just the way he hits the ball. He doesn’t only hit the ball hard, he hits it with an amount of spin that makes the ball go away from you.” 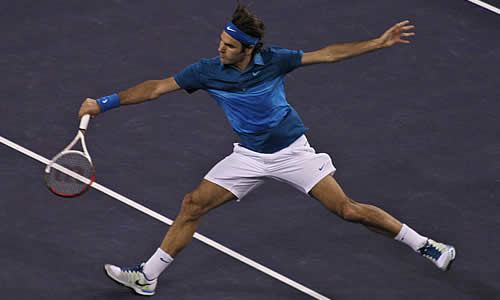 And Federer’s assessment? “I was impressed. With that power and size, that’s something that will never go away and will make him a threat for years to come…he’s a great athlete: it shows.”

Nadal the politic: Asked if he thinks we have possibly the greatest era in men’s tennis: “I am not the right one to say that: Probably will be very arrogant if I answer this question, yes? You know better the history probably than me and there are very qualified people around to analyse that.”

And Azarenka, on putting in the hard hours: “It doesn’t matter how confident you are if you don’t put up the hard work, if you’re not disciplined enough, it’s not going to help you win matches, your confidence, right? What’s most important for me is routine, the discipline, giving it all every day. Confidence I have then.”

This from Stuart Fraser after No12 Nicolas Almagro defeated No7 Berdych, 6-4, 6-0 to reach his first Indian Wells quarter-final: “Has nobody told Almagro the February clay-court swing is over?”