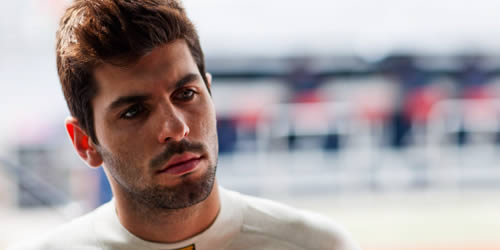 Jaime Alguersuari has joined tyre suppliers Pirelli as an official test driver after losing his race seat at Toro Rosso in the close season.

“I have a huge desire to get behind the wheel of an F1 car again and return to competition so this is a brilliant chance for me,” the 22-year-old said.

The Spaniard was dropped by the Faenza-based team despite scoring points in seven races last year.

Both he and team-mate Sebastian Buemi were replaced by Australian Daniel Ricciardo and French rookie Jean-Eric Vergne.

Buemi has since joined Red Bull, Toro Rosso’s senior team as their third driver for the 2012 season.

Alguersuari, who became the sport’s youngest driver in 2009 aged just 19, then joined the BBC as a summariser on Radio Five Live.

He and Di Grassi will take part in four development tests for Pirelli at Monza, Spa-Francorchamps, Barcelona and Jerez.

Ex-Pirelli test drivers have good records in securing a race seat after performing this role.

Nick Heidfeld’s ill-fated time at Renault came after he tested for the Italian company in 2010, whilst Pedro de la Rosa returned to Formula 1 this season at HRT after testing for Pirelli last season.

Sri Lanka v England: Reasons to be cheerful despite defeat