Tom Wellman looks back at the weekend in Spain, where messages of support poured in for Fabrice Muamba & Eric Abidal 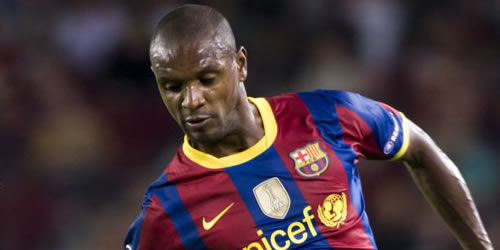 Many common gripes of La Liga, and indeed, football in general is the growing numbers of players resorting to underhand tactics. But these pet hates are pushed aside when incident’s such as Muamba’s awful cardiac arrest occur. Another case we must not forget is Barcelona’s Eric Abidal and his liver problems. Diagnosed with cancer last year, Abidal fought back to lift the Champions League trophy at Wembley after Barcelona’s 3-1 victory over Manchester United. Sadly, a year on from his operation to remove the tumour, Abidal now has to undergo a liver transplant. However, floods of goodwill have rushed into the Camp Nou to wish Abidal well and El Clásico adversaries, Real Madrid sported shirts in support of two fellow pros.

English football is still recovering from the shock collapse of Fabrice Muamba on Saturday and the whole footballing world extends their goodwill towards his condition. In Spain, dark memories were brought back of a number of cardiac related deaths, Sevilla’s Antonio Puerta being one of them. That particular casualty raised the need for defibrillators to be readily available at grounds throughout the country, and caused clubs across the world to take note. Muamba’s immediate attention can be linked to the horrific incident concerning Puerta five years ago, and hopefully the Bolton Wanderers midfielder’s recovery can be a positive one following the Spanish’s midfielder’s sad death.

Caballero and Cazorla cause a Real slip-up

Two moments of magic helped Malaga snatch a surprise draw at the Bernabeu which cut Real Madrid’s lead at the top of the league to eight points. Custodian Wilfredo Caballero produced a magnificent fingertip stop to divert Cristiano Ronaldo’s low shot over the bar to prevent Real taking a two-goal lead when the Portuguese striker was put through one-on-one. Santi Cazorla then rescued a point in second-half stoppage time with a spectacular free-kick into the top corner – Ronaldo take note.

Villarreal’s defeat by high-flying Levante spelt the end of Jose Molina’s reign at the club as they perilously linger just above the relegation zone. Xavi Torres grabbed a late goal to boost Levante’s European prospects but prompt Molina’s sacking just 10 games into his reign. Miguel Angel Lotina has been given the job in a rapid turnaround and he will take charge immediately. The Yellow Submarine’s supporters have a right to be worried about their situation as Lotina’s first game is against Real Madrid on Wednesday.

Athletic Bilbao blew away Premier League champions Manchester United in midweek with another dominant performance but couldn’t prevent Valencia from giving them a taste of their own medicine in a 3-0 loss at San Mames. Roberto Soldado’s hat-trick damaged Bilbao’s hopes of playing in next season’s Champions League, while Atletico succumbed to 2-1 defeat in Mallorca – Diego Simeone’s second defeat as manager. Radamel Falcao missed a penalty during the game and Mallorca had to survive with 10 men – but Atletico’s striking prowess couldn’t claim what would have been a valuable point.