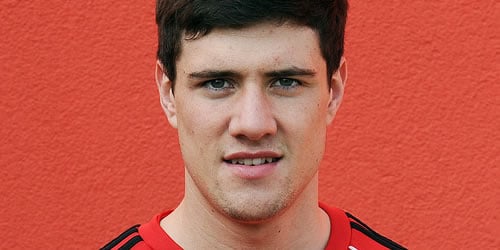 Liverpool woes in front of goal have been well documented this season Photo: Standard Chartered

Liverpool defender Martin Kelly has admitted that his strike-rate needs to improve if he wants to develop into a world-class full-back at Anfield.

The 21-year-old has made 18 appearances for Kenny Dalglish’s side this season, and was particularly impressive in Liverpool’s 3-0 victory over Everton in 217th Merseyside derby.

However, the right-back was guilty of missing a number of clear-cut chances against Arsenal and Everton, and Kelly is keen to become more prolific in front of goal – an attribute he feels is key to becoming a successful modern-day full-back.

“With each game I have felt stronger and stronger to get into the positions I want to be,” Kelly, who has netted once this season, told Liverpool’s website.

“I have got myself into a few good positions, I just need to start finishing them off. I think the goals will come. I’ve enjoyed starting and learning in the games I’ve had.

“As you progress in your career, you want to score goals. The main thing is I am getting into those positions and the goals will come.

“As a modern day full-back, you’ve got to be getting into those positions as well as winning your one-on-one battles with the winger. I’ll keep working on it in training.”

Liverpool’s 3-2 defeat by Queens Park Rangers on Wednesday left Dalglish’s side 12 points behind fourth-placed Tottenham Hotspur in the race to qualify for next season’s Champions League.

The Reds face Wigan Athletic on Saturday with a trip to Blackburn Rovers also on the horizon in coming weeks, and Kelly believes games against the relegation-threatened sides are always more testing towards the end of a campaign.

“I think it is a difficult time to play the teams in and around the relegation zone,” he said. “Their team talks must be ‘live or die’.

“They’ve got to try and win at Anfield, but we’re Liverpool and we’ve got to win every game – that’s what is drummed into us.

“It will be tough because they’re fighting against relegation and will give that extra few per cent, but we’ve got the ability to hopefully win the game.

“Every game is important to win and get into that winning habit. You need to try to get into a winning habit in every game, whether it’s League Cup, FA Cup or Premier League.

“We’ve got to get back to winning ways. We’re doing the right things, we’ve just got to get the wins.

“Every game is a tough game in the Premier League, but we’ll see what we can conjure up and try and put the performance on the fans want.”