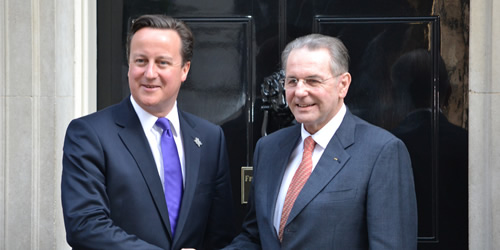 Cameron welcomed International Olympic Committee president Jacques Rogge to 10 Downing Street at the start of the final three-day inspection visit, which is expected to see London receive congratulations for its preparations.

IOC inspectors have consistently praised the planning of organisers Locog and the Olympic Delivery Authority, with back-slapping rather than table thumping – which has characterised visits to other hosts at this stage – likely to dominate the week.

“London has raised the bar on how to deliver a lasting legacy,” said Rogge. “We can already see tangible results in the remarkable regeneration of east London.

“This great historical city has created a legacy blueprint for future Games hosts.”

Meanwhile, Cameron claimed that Syrian athletes would be able to take part this summer, although officials covered by a European Union travel ban would not be allowed to enter the UK.

Syria expects to send five competitors to the Games but it’s not clear whether General Mowaffak Joumaa, the head of Syria’s Olympic committee who has close ties with President Bashar al-Assad’s regime, is included on the banned list.

“Syrian athletes will be taking part in the Games, and that is right, they should not be punished for the sins of the regime,” said Cameron.

“However, let’s be absolutely clear, Britain has led efforts within the European Union and elsewhere to institute asset bans, travel freezes and punishing sanctions against this despicable regime. Anyone covered by one of those travel bans will not be welcomed in London.”

Cameron and Rogge, who were joined in their discussions by Culture Secretary Jeremy Hunt, Olympics Minister Hugh Robertson and London 2012 chairman Seb Coe, also discussed security arrangements for the Games.

“This will be the biggest and the most integrated security operation in mainland Britain in our peacetime history,” he added.

Despite recent figures pointing to a fall in sports participation among some age groups, Cameron also claimed that new initiatives, such as the forthcoming School Games, will revitalise local sport in the Britain for “generations to come”.

He added that the £9.3bn invested in facilities would not be wasted, telling Rogge: “I think it is time to tear up any notion of the Olympics leaving behind white elephants. Six out of the eight venues already have long term futures agreed.”