Catherine, Duchess of Cambridge, gives Britain's Olympic teams a lesson in finishing as part of her role as a Team GB ambassador 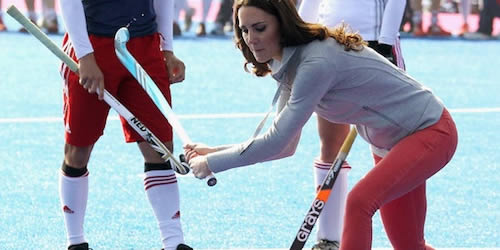 The Duchess of Cambridge showed she'd lost none of her touch

Great Britain’s hockey teams have received a royal visit and a lesson in finishing from Team GB ambassador The Duchess of Cambridge.

After her brother-in-law’s recent win – albeit with a flying start – over Usain Bolt, Catherine, 30, buried a succession of shots as she visited the Olympic Park.

Although it’s seven years since she last played, Catherine, who captained her school team at Marlborough College, showed she’d lost none of her touch as British team captain Kate Walsh and Barry Middleton watched on.

Catherine, the Duke of Cambridge and Prince Harry were unveiled as Team GB ambassadors last year and will play a special role mentoring young and aspiring Olympians, who are attending the Games to get a taste of the Olympic experience as they look towards Rio 2016.

She was presented with a team shirt, emblazoned with ‘Cambridge’ and the number one, and a specially designed hockey stick.

“She also demonstrated some real skill and talent on the pitch, so we will all be training extra hard to ensure we keep our places in the squad,” joked Walsh.