Luol Deng managing the pain in pursuit of Olympic ambition 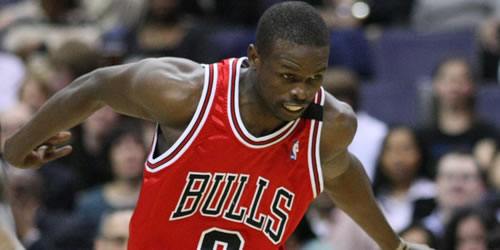 Chicago Bulls star Luol Deng insists his unrelenting schedule will have no impact on his Olympic ambitions this summer.

All-Star Deng is the talisman of the British basketball squad, which means head coach Chris Finch has been watching his unrelenting NBA schedule with keen interest.

He has suffered with wrist injuries throughout his career and has already been sidelined this season with a recurrence of the problem – this time ligament issues in his left wrist.

Deng’s problems are also compounded by the amount of court time he is enjoying for the Bulls in the absence of injured team-mate Derrick Rose.

Team management has discussed limiting Deng’s minutes in back-to-back games and his court time average, 39.1 minutes, is the third highest in the league.

“The wrist is still here but it’s up and down but I’m finding ways to be effective,” Deng told national press agency Sportsbeat.

“My downtime is really important with a schedule like this and knowing what is coming up in the summer.

“I’ve got to be mature about finding ways to rest my body and I’m doing all the little things to stay healthy.

This is my eighth year in the NBA and I’ve never been through this shortened season before – so I’m learning as I go.

“It’s just something I have to play through. I have to adjust my game to find ways I can still make an impact.”

In an exclusive interview Deng also admitted his delight that Byron Mullens, the Charlotte Bobcats centre, is set to become the third NBA regular in Team GB this summer, joining Deng and Ben Gordon, the London-born Detroit Pistons star still to make his national debut.

“I spoke to him when we played Charlotte earlier in the season and he told me his mum was from England. He’s going to really help us.

“We’ve come a long way and I really believe that we can compete against the rest of the world. I think we’ve got guys who can make an impact.”

Chelsea can’t afford not to be in Champions League, warns Cech