What did we learn from the Malaysian Grand Prix, where Ferrari's Fernando Alonso won a rain-affected race at Sepang? 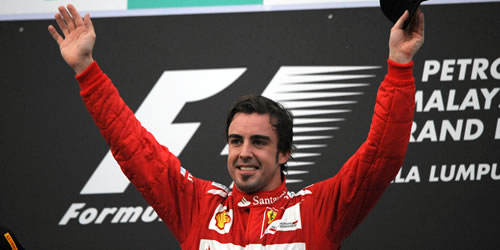 Sergio Perez will be a world champion

The sublime drive from the 21-year-old Mexican in Sepang belies a driver racing for the modest Sauber team. To give the Swiss outfit their best result in their 20 year history (excluding the BMW years) is an amazing achievement, and the fact Perez was disappointed not to get the victory shows great hunger and desire for the future. He is young enough to eradicate the mistake that cost him an unlikely victory and he showed remarkable composure for the most part when hunting down a double world champion in Fernando Alonso. If he can produce a drive like this in a Sauber, imagine what he could do with one of the front running teams in the future. One thing is certain though, Sauber won’t be able to hang on to him past this season. It seems more and more likely that he will replace the underperforming Felipe Massa at Ferrari, who toiled to 15th today – don’t forget, Perez is on Ferrari’s young driver programme.

Sebastian Vettel is feeling the pressure

The venom directed towards Narain Karthikeyan after the race today by Vettel following their collision that cost the German a points finish is very telling. Vettel is out of practice at fighting his way through the field having been in a class of his own last season. It has to be said, Vettel wasn’t anywhere near fighting for the victory or even a podium on Sunday – and when you add to this that Mark Webber has out-qualified him in both races, there is definite room for improvement. Vettel hasn’t become a bad driver overnight – his second place in Melbourne shows that, although he seems a little surprised about how the other teams have caught up to the once all-conquering Red Bull. He may benefit from the break ahead of China and Vettel will undoubtedly be back amongst the front-runners soon.

Romain Grosjean needs to calm down

The undeniably quick Frenchman will have his bosses at Lotus banging their heads on brick walls after he threw away a golden chance to make a name for himself in Sepang. After a fantastic start promoted him to third from sixth on the grid, he tapped the back end of Michael Schumacher’s Mercedes, which severely damaged the German’s chances and beached his Lotus in the gravel traps. With a pacy car underneath him it may be advisable for him to start playing the long game and not overtake everyone on the first lap, otherwise his obvious talent will be wasted and team bosses will undoubtedly lose patience with him. Impressive as his qualifying pace is, having been quicker than team-mate Kimi Raikkonen for two consecutive races counts for nothing if he fails to bring the car home.

Williams are on their way back

Bruno Senna’s eight points for Williams helped the team overhaul their entire points tally from a dismal 2011 season, and it could have been even more if Pastor Maldonado’s engine hadn’t expired two laps from the finish. Both drivers had shown good pace in the race and their qualifying times were steady if not spectacular. Indeed, Maldonado was unlucky not to make Q3 after being ousted by the Mercedes drivers in the closing moments of the second session. However, the fact that he will be disappointed not to make Q3 is a marked improvement on last year, when the Venezuelan was often struggling to make the cut in Q1. If he can stop breaking mirrors and walking under ladders he could lead the team back up the grid.

F1 boss Bernie Ecclestone has had some radical ideas in his time, but one that attracted major derision last year was a proposal to introduce trackside sprinklers to liven up dull races. As most motor racing fans know, the best races tend to happen in wet or changeable conditions, as seen on Sunday. What better way to brighten up a track like Valencia where races are more like processions? Turn the sprinklers on and watch the action arrive all at once. True, it would be gimmicky and goes against the purity of the sport. But it would showcase those with the best all round talent and provide us with better races, which we all want. The teams, however, are unlikely to back it and then there is the question over who would fund the sprinklers – cash strapped circuit owners or Bernie?

RaboDirect Pro12: North and Davies get Scarlets over the line

RaboDirect Pro12: Lessons from an eventful weekend of rugby