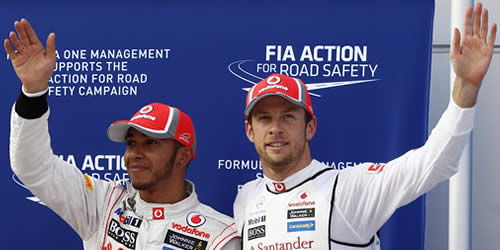 Hamilton’s time of 1.36.219 was over a tenth quicker than Button to ensure McLaren repeat their front row lockout from the season opener in Melbourne last week.

“It’s been a good weekend so far,” said Hamilton. “I don’t know if it’s definitely the best place to start – it’s a long haul down to Turn One.

Button praised his team-mate’s pole winning lap and acknowledged the threat of the rejuvenated Schumacher in the Mercedes, who achieved his best grid slot since returning to the sport in 2010.

“Lewis did a great lap at the start of Q3, I got closer, but it wasn’t to be,” said Button, winner last weekend in Melbourne.

“The Mercedes is renowned, especially Michael, for getting good starts so it’s going to be an interesting Turn One.”

Defending world champion Sebastian Vettel qualified sixth but will start fifth as Kimi Raikonnen takes a five-place grid penalty for changing parts of the gearbox in his Lotus.

Vettel was the only driver to use the harder compound tyre in the top 10, which means he will start on those tyres tomorrow.

Ferrari improved on their dismal qualifying performance from Australia with Fernando Alonso making it into Q3 where he was ninth-quickest, with the under pressure Felipe Massa 12th.

Toro Rosso’s Jean-Eric Vergne was the midfield fall-guy who was knocked out in Q1 along with the Caterham, Marussia and HRT cars.

The Frenchman was over half a second slower than Bruno Senna, the last driver to qualify for Q2.

Heikki Kovolainen will start last after he also changed his gearbox. The Caterham driver was again the quickest of the backmarkers.

Both HRT drivers will start the race this week, with Narain Karthikeyan and Pedro de la Rosa having missed last weekend’s race after failing to reach the 107 per cent benchmark.