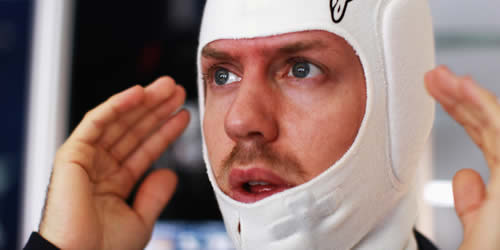 Sebastian Vettel has launched a scathing attack on one of the backmarkers after a collision cost him fourth place at the Malaysian Grand Prix.

The defending double world champion was furious after clipping Narain Karthikeyan’s HRT as he lapped him, shredding his left rear tyre late on and forcing the German to pit.

“Like on normal roads, you have some idiots driving around. It seems there is also one driving here,” said Vettel, who finished 11th at Sepang.

Like Vettel, Karthikeyan refused to name names in response to the criticism unsubtly aimed in his direction, but acknowledged the difference in performance between his car and the frontrunners.

“We do not want to be a hindrance but this does not give them the right to bully you,” said the HRT driver after the race.

He added: “With Vettel, I got on to the marbles and the car had a lot of wheelspin. I had to jink to get out of it and unfortunately he was there. What else I could I do?

“Some of these guys when you get lapped, they just try and bully you so much, it’s not fair. I won’t mention names but sometimes they overtake you and they want you to go off the road.

“With this car it’s a big task to qualify and to finish is a big task. We’re a small team. We don’t want to be a hindrance but doesn’t give them the right to bully you. This is not right.”

Red Bull team boss Christian Horner said: “[It was Karthikeyan’s] responsibility to get out of the way of the leaders as he is a lapped car

“The incident [with Karthikeyan] caused damage to the rear brake duct, which went into thermal runaway.

We wanted to stop the car before the end from a safety point of view, but Seb couldn’t hear us because of the loss of the radio and continued.

“Thankfully his car got to the end without failing, but the incident cost Sebastian at least a fourth-place finish today.”

RaboDirect Pro12: Lessons from an eventful weekend of rugby