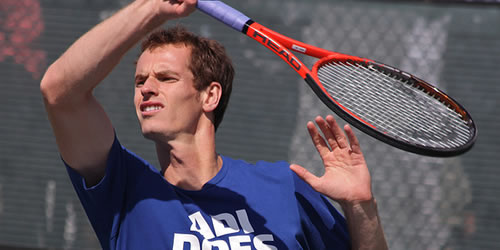 With just one lone unseeded man amongst the 16 who took to Miami’s purple and green for the fourth round of the Sony Ericsson Open, some high quality tennis was guaranteed.

That one man was Grigor Dimitrov and, despite beating his first top-tenner in the previous round, he could not do it again against Janko Tipsarevic.

By the time one Serb was through to the quarters, the top Serb was ready to try his chance on Centre Court. The current No1 and defending champion, Novak Djokovic, took on the Gallic flair of Richard Gasquet and won.

Former No1 and current No2, Rafael Nadal—three times a finalist in Miami—reached the quarters for the sixth straight year with an increasingly confident performance again Kei Nishikori.

They were followed by yet another former No1, Andy Roddick, who played his best match in many a month to beat Roger Federer just 20 hours before. Would he have the physical and mental reserves to summon up the same form against Juan Monaco, especially with such vociferous South American support for the Argentine?

A two-time winner in Miami, Roddick aimed to reach his seventh Miami quarterfinal but instead he fizzled out like a damp squib compared with the fireworks of the night before.

Before the day was done, the battle of Latin America would reach its climax in the last contest between Juan Martin del Potro and David Ferrer. Both men had come to Miami in great form, with 21 match wins apiece for the season. Both were former semi-finalists here, and they had split their last two matches. Ferrer came through their intense five-setter in the Davis Cup final on clay last December but their previous meeting was in Miami in 2009, and del Potro won with ease.

Such was the Centre Court programme that some fine-quality players found themselves, with a significantly smaller crowd, on Miami’s second court. Mardy Fish, the top-seeded American, was not happy at the relegation but rediscovered some of his 2011 form in dismissing an on-fire Nicolas Almagro.

The other man reaching new heights at the end of 2011, Jo-Wilfried Tsonga, also regained last year’s form to sweep past Florian Mayer.

And sandwiched between these two matches was a man yet to show the Miami faithful much tennis at all. Andy Murray was handed a pass to the third round by an injured Milos Raonic, so he faced the resilient Gilles Simon with just an hour and a quarter of court time under his belt.

Murray may have won the Miami title in 2009 as well as four other Masters titles on the hot North American courts, but he nevertheless had something to prove. In the last two years, he had fallen at the first hurdle in Miami and, to make matters worse, he had done the same in Indian Wells last week. After a great end to 2011 and a strong run in Australian and Dubai, he needed to make an early impact in the place he calls home for much of the year.

It was a cautious start from the Scot against the brick-wall tennis of Simon, a combination that extended the opening game to 17 minutes. The third point alone contained 40 strikes and the two players averaged 11 strokes per rally by the end of the game.

Point after point was teased out from the baseline, physically testing and tactically draining. Eventually, Simon unleashed a down-the-line winner for a first break point but failed to convert it.

After 12 minutes, he worked another chance, and then another, but Murray’s ground strokes grew stronger and more penetrating to hold the Frenchman off.

The Scot would not face another break point in the match, and he afterwards pointed to this opening as the key to his performance.

“I felt fine from the start of the match…probably helped with that first game, even though it was 17, 18 minutes, was probably a good thing after not playing for a few days.”

In the hot and humid conditions, they both looked drenched and drained but no less focused and no less resilient as they continued to play long, demanding rallies.

Soon, Murray began to hold serve more easily, find better length and weight of shot than Simon and, in this match of attrition, the super-fit, Miami-acclimatised Murray was always going to come out on top. He broke Simon to love and held to love for a 4-1 lead.

Simon held serve at 2-5, but the frustration of facing someone able to counter every shot and every rally a little better than he could began to show. He rushed the net on Murray’s serve—and his skills were simply not up to that tactic. Murray took the set 6-3, finishing with his first ace of the match.

In the second set, Murray had the chance to break in the fifth game but Simon took his courage in his hands to attack the net again and held off the break through several deuces in a near recapitulation of the first game of the match.

It was still gruelling tennis with few unforced errors, and Murray looked the more comfortable in the kind of conditions that only Miami can produce. Simon, face flushed with his efforts, could only retire to the shade and his ice collar to prepare for the next marathon.

Still the average rally length was nine strokes, with the occasional 30-shot face-off thrown in to keep the players busy. Murray again pressured the Simon serve in the seventh game, and this time broke to lead 4-3.

The next game, on Murray’s serve, delivered the killer blow—a lob over the advancing Simon’s head that clipped the base line and surely drained the last drop of energy from the Frenchman’s body. Murray finished the job with two aces, in a convincing if exhausting 6-4.

Murray will face Tipsarevic in the quarter-finals, perhaps one of the easier prospects at this stage of the competition. They last played on the grass of Queens in 2011, where Murray won, although Tipsarevic beat him in Dubai in 2010.

However, Nadal faces the daunting prospect of Tsonga, who took only 53 minutes to beat Mayer. Djokovic’s opponent will also be formidable, though the Serb would enjoy an early night knowing that Ferrer and del Potro should be fighting it out—possibly in three sets—into the early hours of the morning.

So yes, Murray should be reasonably happy with the quarter-finals ahead.