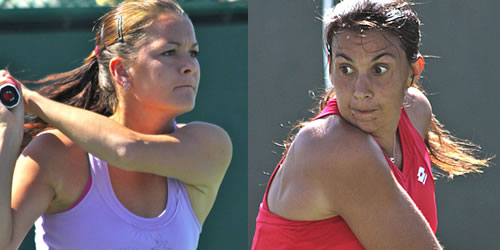 The women’s quarter-finals at the Sony Ericsson Open read like a roll call of this Premier event’s previous champions.

Three names had, between them, won 10 of the last 14 singles titles in Miami: Venus Williams, whose success here began back in 1998; Serena Williams, five-time champion; and two-time winner and defending champion, Victoria Azarenka.

But by the time the draw had whittled down to the last four at the tropical Key Biscayne, all three former champions were gone: The 2012 trophy will be lifted by a brand new pair of hands.

Perhaps the most surprising of the losses came to the 2009 and 2011 winner, Azarenka, and not simply because of her previous success in Miami. The extrovert Belarusian has been the undisputed player of the year—unbeaten in 26 matches and winner of four titles, including her first Grand Slam in Australia and the Indian Wells title last week.

Even when faced with what looked an impossible mountain to climb in her fourth round match against Dominika Cibulkova this week—a set and 5-2 down—her powerful all-court tennis and supreme confidence turned it around.

Azarenka was up against Marion Bartoli and held an eight-to-10 advantage in their previous matches. However, they had split their last two meetings and Bartoli, one of the hardest-working women on the tour, has continued to climb, step by gruelling step, in the rankings. At the age of 27, she is at a career-high No7, and clearly believes there is more to come.

She pounded out a 6-3, 6-3 victory, taking the first four games of the match and turning around the second set from 1-3 down with five straight games. She won 14 of the last 16 points.

The Bartoli training regime is renowned: Few who saw her fighting the bungees that shackled her to the Indian Wells backboard will doubt her physical toughness. But the Frenchwoman pointed to her mental toughness in beating Azarenka.

“The key for me tonight was belief. When we played in Sydney this year, I was up 5-2 in the first set and 4-1 in the second set, and I lost both sets, so I knew I had to stay really mentally tough and not show her anything, just totally block out the negative things. Even when I lost those three games in a row, I didn’t get down on myself.”

So Bartoli reached the semis in Miami for the second time and there she will face another intelligent and strong-willed woman in Agnieszka Radwanska.

The Fans’ Favourite of 2011 is also at a career-high ranking, No4, and enjoying great form. She won in Dubai, but all four of her other losses this year came to one woman: Azarenka. So Radwanska will surely be delighted that Bartoli has removed her biggest problem, especially as the Pole has beaten the Frenchwoman in all six previous meetings.

But Bartoli was not fazed by past records: “There’s always a first for everything, so hopefully it’s going to be my first tomorrow…I know I will have to run a lot—and a lot more forward—because I know she’s going to make a lot of drop shots. But I’m going to be ready.”

She summed up perfectly the problems that Radwanska’s crafty, intelligent tennis can pose. She can mix up zipping cross-court forehands, sliced angled backhands and, yes, the most adept drop shots in the women’s game. Indeed her tennis against Venus Williams verged on the sadistic in perhaps the most inspiring of the quarter-finals.

In her first tournament since retiring from the US Open with a debilitating virus, Williams, who has been forced to make major changes to her off-court regime and her diet, showed all the qualities that have made her a champion.

With a wild card entry, she took on some of the best that tennis has to offer, including Wimbledon champion Petra Kvitova, to win four straight matches. The last three of them were tough three-setters, so by the time she took on Radwanska, she had spent three times as many hours on court as the opponent who was eight years her junior: nine to three-and-a-quarter. And it showed, in a courageous but tired effort from the American.

Radwanska, in typical style, had her opponent all over the court but, to combat the tactics, Williams attacked the net at every opportunity, both on serve and on return, to pull off volleys and smashes that would have made the serve-and-volley exponents of the past proud. But she ran out of legs towards the end of a close first set, and Radwanska stormed the second set to take victory in 80 minutes, 6-4, 6-1. It was, in fact a near mirroring of their 2010 quarter-final, which went to Williams, 6-3, 6-1.

Yet for Williams, it was a better result than she had expected and took her a step closer to qualifying, she hopes, for the 2012 Olympics. From a ranking of 134, she will rise inside the top 90.

The third former champion to fall was the most successful of all. Serena Williams has won the Miami title five times and, like her sister, was returning to the tour after a break. She lost in the fourth round of the Australian Open having played only two other matches—at Brisbane—since losing the US Open final.

But the younger Williams is no stranger to returning to competition in good form. She did not lose a set in her first three Miami matches, including a dominant fourth-round win over No6 seed Sam Stosur. What’s more, she had beaten her quarter-final opponent, Caroline Wozniacki, in all three of their meetings.

The Dane, in any case, was not enjoying the best of seasons, dropping from No1 at the start of the year to No6 after a fourth-round exit in Indian Wells. But in Miami she, like her opponent, had not dropped a set—and she played one of her best matches of the year to beat Williams, 6-4-6-4.

It was a strong mental as well as physical performance, too: She saw a 5-1 lead in the second set pulled back to 5-4 and went 30-30 on her serve, but she held off Williams to reach the semis in Miami for the first time.

Last year, by this stage, Wozniacki had already reached three finals and won two of them. She will now take on the fourth semi-finalist, Maria Sharapova, to reach her first final of 2012.

The Russian was in formidable form in beating Li Na 6-3, 6-0, having lost to the Chinese woman in straight sets in their previous four meetings. The win took the Russian to her fourth Miami semi-final and she advanced to the final from three of those matches—but she has never won.

The Russian will have to be at her most aggressive against Wozniacki, too. The Dane beat her in their last two hard-court encounters, and with some ease.

This time, it may all come down to that intangible quality, confidence, and with Azarenka out of the picture—who beat Sharapova in the finals of Indian Wells and the Australian Open—the Russian will have bags of it.