Marianne Bevis looks ahead to the Miami Masters, where the top four men in tennis are all in action 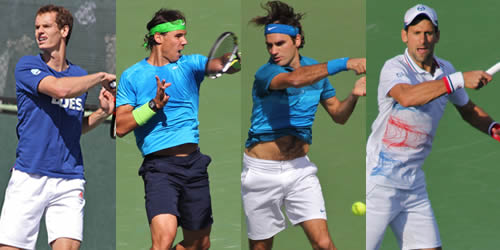 Hot on the heels of the first and biggest Masters of the year in Indian Wells comes—within barely 48 hours—the second.

Miami’s Sony Ericsson Open is the hard-court crescendo before the tour heads to the calm and sophisticated Mediterranean for two unbroken months of clay.

Bright and breezy, extrovert and colourful, set in lush gardens but a hop, skip and a jump from the ocean, it is the cosmopolitan, heart-on-the-sleeve version of its serene Californian sister—and easy to see why it has so often been voted the players’ most popular Masters.

Year on year, Miami grows more popular as the tournament sets new attendance records and sells out hotels for miles around—and considering the array of players on show in its 96-person draws, it’s hardly surprising.

On the women’s side, this event sees the return of three Major champions after time away. Serena Williams and Kim Clijsters play for the first time since the Australian Open while Venus Williams has not played a WTA event since falling ill during the US Open. Only Andrea Petkovic, still injured, is missing from the 32 top-ranked seeds.

They are all, of course, headed by the Indian Wells champion, Victoria Azarenka, now on a 23-0 match-win record of four straight titles—and the defending Miami champion.

It’s the same story in the men’s draw, with the top 28-ranked players on show, and 45 of the top 50 players. Missing injured are No29 Stan Wawrinka and No31 Mikhail Youzhny, and still sick is No30 Robin Soderling.

Top of the pile, as he has been since last summer, is No1 and defending champion Novak Djokovic. He is one of five former Miami champions in the field—the others being Andy Roddick, Nikolay Davydenko, Andy Murray and Roger Federer.

But Djokovic is also one of a very select band that has managed the Indian Wells/Miami double, a huge challenge comprising at least six match wins in consecutive hot, hard-court Masters. He did it last year—and his potential semi-final opponent, Federer, did it in 2005 and 2006.

It is worth pointing out, too, the scale of the mountain that faces the men not inside the top four. Djokovic, Federer, Murray and Rafael Nadal won all nine Masters events in 2011 (and the only one so far this year) and only three others even reached a final.

So does anyone else have the key to Florida in the 2012 Sony Ericsson Open?

More than a month ago, the organisers of the Sony Ericsson Open announced the date and time that the defending champion, the best player in the world, would open his campaign at Miami’s Crandon Park. It will be—no surprise—in the prime spot on Saturday evening.

His record here is certainly one of the best: a finalist three times, winning twice. This year already, he has won a third Australian Open title by beating both Murray and Nadal and, although he lost in the semis of Dubai and Indian Wells, he will still be the favourite in the heavier conditions of Miami.

He may also, along the way, get to revisit one of the most memorable matches of 2011, his semi-final comeback to beat Federer at the US Open. They have not met since and, with Federer bringing perhaps the hottest form of 2012 to Miami, it could be the standout match of the tournament.

Pitfalls for Djokovic before that are not too many, though Marcos Baghdatis as a first match, with the Cypriot in some decent form, could be easier: Baghdatis has taken a set off the Serb in each of their five matches since 2007.

Djokovic’s first seeded opponent is likely to be compatriot Viktor Troicki, who he has beaten 10 times out of 11, including here last year. His records over Richard Gasquet and Feliciano Lopez, who fight for a fourth-found meeting with Djokovic, are equally dominant.

The bottom of his quarter is rather more taxing for those involved: No11 Juan Martin del Potro is lined up to meet No5 David Ferrer—although Marin Cilic and Bernard Tomic respectively may be trip-wires. The last meeting between Ferrer and del Potro was a blood-on-the-court five-setter in the Davis Cup final last December, and could be the match of the quarter: Both are playing good tennis at the moment.

Federer was a finalist 10 years ago, falling to Andre Agassi, and is the only player since to win Miami titles back to back. With his win in Indian Wells on Sunday, he overtook Djokovic to lead the ATP ranking race—based on a 15-match winning streak and three titles since his semi-final loss in Melbourne. But he is still more than 3,300 points adrift of the No1 in the overall rankings and is unlikely to make much impact on that gap unless he beats the Serb in the semis: Federer lost in last year’s semi to Nadal.

Federer’s route to his first standoff with Djokovic since New York is no easy passage, either. He will first play the talented, improving teenager Ryan Harrison. The young American took a set from Andy Murray at the Australian Open, reached the semis of San Jose in February and reached the fourth round in Indian Wells, taking out No27 seed Troicki on the way. In their only previous meeting, at Indian Wells last year, Harrison took Federer to a first set tie-break— and he has risen 60 places in the rankings since then.

In the next round, Federer is likely to revisit one of his oldest rivalries against the 2010 Miami champion and home favourite, Roddick. They have played 23 times since 2001 and the last time Roddick won was in Miami 2008: Federer got his revenge the next year, but both matches were three-setters.

Federer’s fourth round opponent should be Gael Monfils, who pulled out of Indian Wells sick—so at the very least he will be fresh—or Juan Monaco. Monfils has reached two finals this year, beating Nadal in Doha and winning a set from Tomas Berdych in the Montpelier final. He can blow hot and cold, a dangerous proposition.

The bottom of this quarter poses, ultimately, Mardy Fish, who in reaching the semis last year overtook Roddick as the highest ranked American. Fish has had a slow start to 2012 compared with his career-high finish to 2011, and facing the likes of Kevin Anderson, Fernando Verdasco and Nicolas Almagro—who so far this year has a 20-6 win-loss record plus a win over Berdych to reach the Indian Wells quarters—Fish’s progress is far from straightforward.

This is as close to a home tournament outside the UK as it gets for Murray: Miami is his training base. However, he has not won a match here since winning the title in 2009.

But although Murray had a falling off of form after losing at the Australian Open in 2011—he made three first-match exits in his next three events, including Indian Wells and Miami—it’s a more confident Murray who embarks on his Miami campaign this year. He lost his opener at Indian Wells last week but, prior to that, he beat both Djokovic and Berdych in Dubai before losing to Federer in the final.

His early rounds are reminiscent of Federer’s in Indian Wells: what should be an easy first match against 71-ranked Alejandro Falla followed by the dangerous big-serving 26th seed, Milos Raonic. The clay-court expert Gilles Simon should outlast Jurgen Melzer to face Murray in the fourth round before an unpredictable line-up for the quarters.

On paper, Berdych, runner-up two years ago and a semi-finalist in 2011, should be Murray’s opponent but there are the talents of Alexandr Dolgopolov, Grigor Dimitrov and a repeat playing of David Nalbandian against Janko Tipsarevic to consider. The 30-year-old Argentine is enjoying a purple patch that took him to a three-set quarter-final against Nadal at Indian Wells. His fitness may determine whether he can pull off the same trick in Miami.

Nadal has not won a title since the French Open last year, time and again facing —and losing to—Djokovic. After another loss to Djokovic in a marathon final in Melbourne a couple of months ago, he took an extended period off to rest and recuperate some long-term physical niggles, and his appearance at Indian Wells was his first event since.

His loss to Federer there will no doubt sharpen his resolve in Miami—and his three final finishes here without a title win will no doubt provide plenty more incentive.

Nadal should be optimistic about the early rounds, too. He beat his first opponent, Santiago Giraldo, in all four previous meetings, most recently in Tokyo last autumn. Against Radek Stepanek, it is a similar story and the Miami conditions will also suit the Nadal style over the net-attacking Czech’s game.

Nadal beat one of his potential fourth-round opponents, Marcel Granollers, for the loss of only five games in Indian Wells last week, and beat the other contender, Kei Nishikori, in Miami last year.

The other half of Nadal’s quarter poses some harder questions, with John Isner—winner over Djokovic in Indian Wells and newly in the top 10 this week—and Tsonga fighting for a place in the quarter-final.

The Frenchman has yet to hit the heights of his end-of-2011 peak, and he lost to Nadal in Miami in 2010. Lurking against Isner, though, is the 2008 title winner, Nikolay Davydenko, whose run in Indian Wells was cut short by illness, but he played some good tennis in Rotterdam.