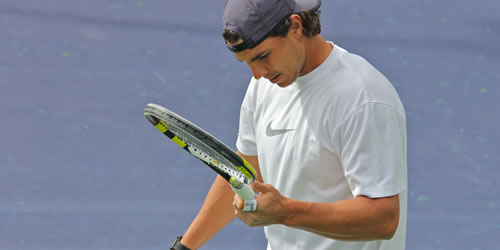 Rafael Nadal confirmed his decision to leave his role this week his role Photo: Marianne Bevis

Rafael Nadal has resigned from the ATP Players’ Council after almost four years as its vice-president.

Confirmation came initially via the New York Times’ Christopher Clarey in a tweet on Monday, which reported Nadal’s camp as saying “he resigned last week…felt lack of support from some of the Board.”

Naturally, at the first media opportunity on Tuesday at the Sony Ericsson Open in Miami, Nadal was asked to elaborate.

“If I go to the Players’ Council, I try my best,” he said. “I put all my energy there. Last year, at the end of the season, [there were] a lot of things there. Finally, I believed I put too much energy there.

“I believe that we did a few things well for the sport. I believe it’s not enough. So today, I believe that I am not the right one to keep working there—I think other people can do better than me.”

It is a typically self-deprecating line from Nadal, but anyone who has followed the previous year’s debates about the tour’s schedule will have discerned a growing undercurrent of frustration from Nadal about the many issues surrounding the tennis season. And the frustration, despite words to the contrary, oozed from the rest of his reply.

“I never said I have been frustrated, I just said that I am not the right one. I don’t have enough energy—cannot still put in my 100 per cent…I can be there just listening, but that’s not my style.

“No, I am not frustrated. I believe that we can do many more things than we have. My feeling is [it’s] a great opportunity to improve the sport, because today the players are very unified.”

Then came what sounded something close to a contradiction about that unity.

“So that’s all. No, no, no, I am not frustrated, I try my best. I go. I resigned from the Player Council knowing that I tried my best and I put all my effort to try to represent my players…We did things, but not enough. That’s my feeling.”

He and his fellow Council members, however, have limited powers. They can make recommendations to the ATP’s Board of Directors but with no guarantee of action. And even with Roger Federer as President to Nadal’s vice-president for almost four years, they have little say when it comes to Grand Slams, which are not part of the ATP structure.

This problem raised its head six months ago at the US Open, where a heavily delayed, rain-soaked few days disrupted the tournament schedule, and it opened the floodgates. Nadal was the most outspoken about being asked to play on wet courts.

“Grand Slams are about a lot of money. We’re part of the show. They’re just working for that, not for us. I understand the fans want to see tennis but the health of the players is the most important and we do not feel protected. We need to have the right representation in these tournaments. I don’t know how, but things like this cannot happen.”

Federer added his voice to those of Nadal, Andy Murray and Andy Roddick: “It has to happen at times that we do come together and speak as a big voice.

“That’s why actually me and Rafa took an active role in the Players’ Council. We should play an active role. That’s why Rafa and myself are where we are and at least working through the issues with the ATP.

“We have not much say in Grand Slam play and that’s without even talking about the revenues and all that stuff. So there are a whole lot of other issues we need to work through with the Grand Slams and the ITF.”

And they did. The US Open has since moved a little in its planning—though only a little.

The Council also achieved some movement in the ATP calendar. This year, the season will end almost three weeks earlier than last year, although the Olympics are shoehorned into the summer and the compulsory commitments of the top players remain the same.

But the melting pot of related issues—the number of events, the number of hard courts, the immoveable Slams and, most recently, the incessant pressure of the one-year ranking system, seethes away. And Nadal has seethed away with it.

It also seems to have brought something of a divergence in the paths of the two men famed for the fierceness of their sporting rivalry and their off-court friendship.

This started to become clear when Federer was asked at the World Tour Finals about the suggestion from some players for a boycott over the schedule:

“Next year’s season is going to be shortened by two weeks. That’s I think as much as we can squeeze it because otherwise a lot of tournaments would have to go, which I don’t think is a very smart idea.

“It was brought up a few months ago, the whole boycott thing. It’s nonsense. It’s not going to happen any time soon. Things are good right now so I don’t see a reason why we should just boycott.”

He added his views on one of Nadal’s favoured solutions, the two-year ranking.

“I’m not a big fan of it just because I think it would make things rather boring. But that’s my personal opinion. Other than that, as president of the Player Council, I think it’s not a good thing for the lower ranked players, to be quite honest.

“I think it’s going to be a struggle for them to make the break through…If we have a two-year ranking, things would be so slow and nothing would really move…I know it could be a good thing for me or for Rafa…because we would stay at the top for a very long time. But for the lower ranked players, I don’t think it’s a good thing and that’s why I can’t support it.”

Then, at the start of the Australian Open, Nadal added fuel to the fire when, having refused to be drawn on the issue of the schedule by the English media, he became more forthright in Spanish.

“[Federer’s] position is easy: ‘I am not going to say anything, everything is positive, I am a ‘gentleman’, others get burned.’”

He attempted to backtrack, but dug a deeper hole.

“I have had experiences in my life that I never could have dreamed of but to finish your career with pain in all parts of your body is not positive. If he finishes his career as a rose, it’s because he has an extraordinary body, but neither Murray nor Djokovic nor I will end up roses.”

Both quickly turned diplomat, with Nadal apologising for going public rather than speaking with Federer privately—“I have always had a fantastic relationship with Roger and I still do”—and Federer defusing the situation: “For me, nothing changes in terms of our relationship, I’m completely cool and relaxed about it, and he seemed the same way.”

But at Rotterdam, Federer was asked again about Nadal’s accusation that he did not speak up enough:

“I don’t believe in those sort of politics. I believe in talking to people, making sure everyone understands the dangers that are faced because of the decisions they want to take.”

The little niggles have continued, in a low key kind of way, helped by a public captivated by the long and close relationship between the two men and by a few leading questions from the media.

At Indian Wells, Federer was asked about umpires enforcing the time rules during matches:

“I do believe the officials could be a bit more tough on timing. I’m not complaining a lot—but I don’t know how you can go through a three or four hour match with Rafa and not get a time violation.”

Needless to say, his comment was put to Nadal—and it elicited perhaps the longest pause ever recorded in a press conference. Finally, he responded.
“Everything depends. The rules are there…you cannot expect players who play six-hour match, play rallies of crazy points, and rest 20 seconds. Somebody’s ready to do it. I’m not ready to do it.”

But the clearest signs of Nadal’s deep discontent with the demands of the tour came in response to an unrelated question and with no mention of Federer. He was asked how he stays mentally fresh during the tennis season.

“Sometimes I am not. I love tennis so the only negative thing in all of this is I don’t want to go from this tour at the age of 27 or 28…Year by year, I have to take a little bit more care about my body. I have to analyse where I have to play, where I don’t have to play.

“Our calendar makes the decisions very difficult—that’s the only thing I have to say I am not happy about with the ATP. You are free to play where you want to play but the calendar puts you in a position that if you want to be in the top positions you have to play almost obligatory since 1st January to very late November.”

Perhaps the weariness that so characterised Nadal’s demeanour at the end of 2012 has simply told him to give up the argument and perhaps it is behind his decision to pull out of all Davis Cup commitments this year.

Perhaps the niggle he says he has carried in his knee since last week hastened his decision to give up the Players Council. His term of office was, in any case, due to end this summer—so perhaps the realisation that he and Federer were never going to sing from the same song sheet on the schedule also hastened the announcement.

We shall have to wait a little longer for some more answers, especially as, for once, Federer has not been part of the conversation. He made a surprise exit from Miami at the hands of Roddick on the night that the news broke, and no-one afterwards got around to asking him about Nadal’s resignation.

Nevertheless, what Federer did say, after they were both elected to the Council for a second term back in 2010, was interesting in the present context.

“I think we are doing a good job representing the players…There are so many issues to talk about and instead of being on the sideline and being critical, it is nice to be part of the process.

“We are opponents on court but we work well in a room setting and I hope this dedication trickles down to the other players and the next generation.”

We therefore wait with some interest for the chairman’s take on the premature departure of his vice-president.