Old pals Adlington and Jackson to reunite at London Olympics 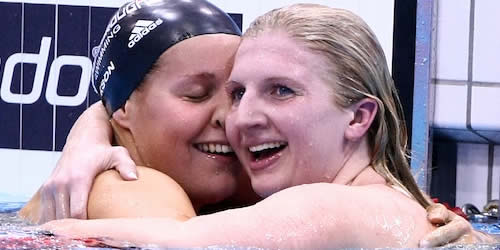 As Joanne Jackson and Rebecca Adlington grinned and hugged on the pool deck – you could be forgiven for thinking you were back in Beijing’s Water Cube three summers ago.

She won double silver at the following year’s World Championships in Rome but since then has struggled for both form and fitness.

However, her second place behind Adlington at the British Gas Swimming Championships secured her Olympic qualification and her time, 4:06.47, while still some way off her best, gives plenty of cause of encouragement.

“I’m so happy, it is just relief more than anything else,” she said.

“I put my heart and soul into that and I wanted it so much after not making the qualifying times for the 400m last year.

“It has definitely come at the right time and I’m so excited that I am going to be here in four months time racing again at the Olympics.

“I still think I can go quicker than that but this was just about making the team, I literally put everything into it and it kind of makes the lows that little bit easier to take.

“When things haven’t been going very well it puts it into perspective. I’ve just got a smile on my face which hasn’t happened for a while.

“Having Becky there definitely helps, I knew she was going to go out there and go fast, so I just tried to stick with her as much as I could.

“I knew I had girls right behind me as well, so I just put my head down and went for it.”

Adlington endured a difficult time in the 400m freestyle last season having to settle for silver at the World Championships in Shanghai as she was comfortably beaten by world record holder Federica Pellegrini.

But having produced one of her best recent performances in the Olympic venue, she is adamant that she is back to her best at just the right time.

“I didn’t feel great in Shanghai in the 400 but I managed to bring it back. It is hard, you are going through so many emotions so it is nice when you know you are doing well,” she said.

“This is an unbelievable venue. That has been the talk of the last two days among the swimmers, is just how great the venue is and how everyone is just amazed we are here.

“It was great to have all my family in the stands and for them to witness the pool as well is great, they have all come down.”

While there are plenty of major championship medallists in action this week, the importance of these trials, with a home Games so close they can almost touch it, is greater than ever.

Ellen Gandy claimed her victory in the 100m butterfly was ‘the greatest feeling I’ve ever had’ – despite previous medals, records and achievements.

“I’ve been thinking about this moment for the last four years and now I can say that I’m going to the London Olympics,” said Gandy.

“To be honest the time was a bit irrelevant because qualifying was all that mattered.”

But for every happy story there was a sob story.

Michael Jamieson lost his Scottish record and Olympic selection to second placed youngster Craig Benson as he settled for third in the 100m breaststroke, which was won by a back in form Daniel Sliwinski.

And Jemma Lowe, sixth in the Olympic final fours years ago, was third behind Gandy and Halsall in the 100m butterfly.

Both later collected their bronze medals with fixed smiles that betrayed their true emotions – their mood probably not aided by the poolside interviewer congratulating them on their podium performance.

“There was a lot of emotion going about after the race but the girls were great,” said Lowe.

“I’m really disappointed that it was so close and I missed out but one of us had to come third and unfortunately it was me.

“I think Great Britain is the only country that has three girls producing these times, which just goes to show the depth of the talent we have here and how hard it is to make the team.”

Jamieson also tried to move on, although he struggled to hide his crushing disappointment.

“I’m totally gutted but I need to refocus now,” he said.

“My whole season, indeed the last four years, is about qualifying for the Olympics and I will be forgetting that race and looking forward to the 200m now.”

British Gas supports swimming at all levels and is getting the nation to show its support for Britain’s swimmers. For more information click here.