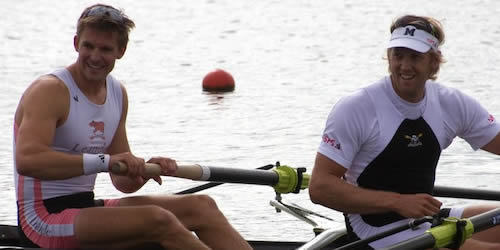 British Rowing’s Jurgen Grobler cast an expert eye over this weekend’s team trials at Eton Dorney and declared himself a happy man.

Rowing has been a consistent deliverer of Team GB medals, with golds at every Games since Los Angeles in 1984.

Four years ago in Beijing, British rowers won six medals, including two golds, and Grobler believes this could be the strongest team sent to the Games in all that time.

Andrew Triggs Hodge and Pete Reed won the men’s pairs trial for the eighth consecutive year and it is expected Grobler will move them out of the pair, where they’ve rowed since 2009, and return them to the four, in which they were Olympic champions in Beijing.

That would tough on last year’s men’s four – who enjoyed an unbeaten season and won the world title – but Grobler will make no excuses for being ruthless and forming a crack crew for London 2012.

“It’s been a special win for me as it marks two Olympiads with wins at final trials and I’ve got to give big credit to Hodgey, he’s a massive strokeman”.

Tom James and Richard Egrington finished second to stake their claim for the other two slots in Britain’s flagship boat but rising stars Constantine Louloudis and George Nash, the world under-23 champions, were not far behind.

“I started coaching here in 1992 and this is the best group of rowers that I can ever remember,” said men’s head coach Grobler.

“They are a wonderful group and our top guys look solid. However, everybody will try to come and beat us.”

Kat Copeland and Adam Freeman-Pask were lightweight sculls winners while Helen Glover and Helen Stanning, the world silver medallists in 2010 and 2011, won the women’s pair ahead of Louisa Reeve and Jessica Eddie.

British Rowing will now finalise the composition of their crews ahead of the World Cup regattas, a line-up that is expected – although not guaranteed – to remain unchanged until London 2012.

“We’ve had some outstanding and very close racing today. That tells us that the depth in the squad is really, really strong,” said British Rowing’s performance director David Tanner.

“We had a few of our top guns missing in the lightweight men’s squad but apart from that I think our rowers have shown that we can really step up for this Olympic season.

“Also, we’ve seen that the venue has delivered. We’ve had good weather and we’ve had a lot of British public here tand that support has been exceptional.”

He added: “I think we have all got the feeling and the message now that the Olympic Games are close, it’s been just the starter we needed for the 2012 season”.

Six Nations 2012: Lessons from a decisive weekend of rugby