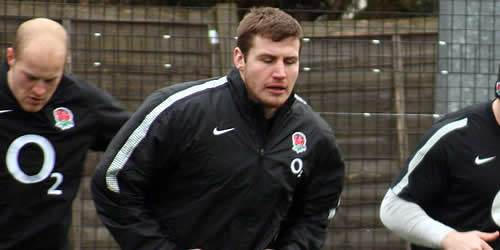 Ben Morgan has impressed for England during the Six Nations Photo: The Sport Review

He has gone from virtual unknown to England’s premier No8 in just a matter of weeks and after signing for Gloucester on Monday – Ben Morgan was back hogging the headlines this week.

The 23-year-old has completed a deal to take him from Llanelli Scarlets to Kingsholm after the Cherry and Whites fought off competition from a host of clubs from right across Europe.

Morgan has made a number of eye-catching performances off the bench for England this season against Scotland and Italy in the RBS 6 Nations, before taking centre stage against Wales at Twickenham in his first international start.

Gloucester were always in the ascendancy to complete the deal as Morgan is Gloucestershire-born, while his desire to play for an English Premiership club next season to aide his future selection was also a decisive factor.

The deal was further complicated as Morgan was contracted to the Scarlets for next season and so a transfer fee was also needed to tempt the giant back-row forward away from Wales.

“We’re delighted that Ben has agreed to come on board for next season,” said Gloucester head coach Bryan Redpath, speaking in the Gloucestershire Echo.

“It has taken some time to put everything together, not least because of the transfer fee element of the deal.

“But then it was not straightforward that Ben would sign for Gloucester.

“He has had several serious offers and several clubs very interested in his services.

“In parts it was a waiting game, and in parts there was a lot of toing and froing too.

“The opportunity of playing for his hometown club was a strong motivator for Ben, but it was never going to make him just sign for us irrespective.

“So while a certain amount of what happens here perhaps sold itself to him from his existing knowledge, I also had to explain in detail about our vision for the next three years for the club.

“We’ve got to fight our way back into the Heineken Cup and then move forward with our plan to ensure Gloucester can be a real force.

“As I said there were no guarantees that he would come to Gloucester, and I had never met him before.

“So I was able to explain what we are trying to do here, and I’m absolutely delighted that he has been excited by what hopefully will happen here moving forward.”