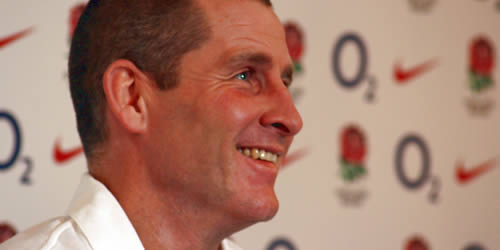 Stuart Lancaster has applied for the England job full-time Photo: The Sport Review

England’s man-of-the-match Ben Morgan maintains the credit for the resounding 30-9 Six Nations defeat of Ireland should rest with interim head Stuart Lancaster, in potentially his last match in charge.

No8 Morgan was the controlling force at the back of an English pack which dismantled Ireland the scrum.

Ireland’s front row could not live with their Red Rose counterparts, conceding penalty after penalty in the second half resulting in both a penalty try and Ben Youngs’ score from a quick piece of improvisation from the scrum-half.

Fly-half Owen Farrell kicked the remainder of the points to secure England second place with four wins from five – an achievement Morgan puts down to Lancaster’s influence as the RFU weigh up who to appoint as Martin Johnson’s permanent successor.

“Coming out here in the wet and performing like that against a tough Irish side was incredible,” said Morgan.

“We’ve only been together for eight weeks now but the team Stuart Lancaster has brought in has just made us grow.

“Graham Rowntree [scrum coach] will be having a few sherbets later, celebrating those scrums.

“We’ve shown how much potential we’ve got and credit to Stuart for coming in and creating the environment to showcase what we can do.”

Lancaster himself was quick to apportion praise to his players, who might have started slowly against Italy and Scotland but really hit their straps against France and Ireland.

In doing so they became the first ever England side to win three away games in the RBS 6 Nations – an impressive achievement for a team that started the Championship with eight uncapped players at Murrayfield.

“The players were outstanding in every department,” said Lancaster.

“The long-term plan revolved around giving young players experience and a lot was made of lack of experience.

“But it’s all about team belief and the belief of the coaches. If you’d have said a few years ago I’d be walking around Twickenham applauding 82,000 people, I’d have thought you were mad.”