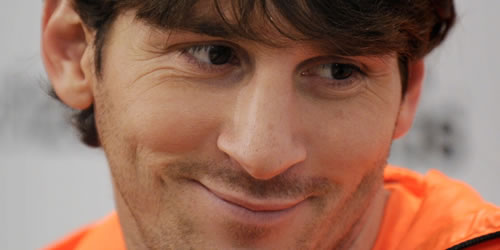 Lionel Messi may have won practically every personal and club honour going, but that hasn’t stopped him from attracting criticism in Argentina for his international performances in the past. It has often been unjustified and is seemingly based more on the fact that he has never played for an Argentine club. However, the diminutive No10 went a long way towards winning over any dissenting countrymen, scoring all three goals in Argentina’s friendly victory over Switzerland last Wednesday. It was his first international hat-trick in a performance proclaimed by Argentine media as the sort he gives for Barcelona.

If this week saw Messi reinforce his international credentials, then the opposite can be said of his former Barcelona team-mate Ronaldinho. Brazil’s No10 was given a public dressing down after last Tuesday’s 2-1 victory over Bosnia. Brazil manager Mano Menezes criticised Ronaldhinho’s performance, suggesting his side’s intricate moves had broken down when the passage of play reached the former Barcelona midfielder. The Ballon d’Or winner’s international future is now beginning to look doubtful. Another player to receive criticism from Menezes following the game was Chelsea’s David Luiz, whose error allowed Edin Dzeko to score Bosnia’s goal. The manager accepted that mistakes are part of the game but criticised Luiz, in what was ultimately a miserable week for the hirsute defender, for allowing it to affect him for the rest of the match.

Meanwhile, in Argentina’s Primera División, Boca Juniors maintained their position at the top of the table, and made history in the process with a 2-0 victory over rivals San Lorenzo at the weekend. It was the first time Boca have played the first four games of a tournament without conceding a single goal, and the Buenos Aires’ side already have as many points in 2011-12 as they did in the whole of last season. While things are going well for Los Xeneizes, the same cannot be said for the three clubs in the neighbouring district of Avellaneda. Bitter rivals Racing and Independiente, and nearby Arsenal de Sarandi, are all yet to win in 2012. Independiente slipped to their fourth defeat in a row this weekend, prompting their coach Ramón Díaz to resign, while Argentinos Juniors, who inflicted Saturday’s 3-1 home defeat, will also have a new coach after Nestor Gorosito resigned following a car crash last week. He will be replaced by Leonardo Astrada for the second time in his career – in October 2009 Astrada took over from him at River Plate, the club where both players begin their respective careers.

Do the Argentine Football Association favour the big clubs?

Boca’s game also saw a controversial debut for Santiago Silva who has been given permission to play for Boca despite the Fifa regulation preventing players representing more than two clubs per season. The burly Uruguayan striker, who has already played for Velez Sarsfield and Fiorentina this year, got the all clear from the Argentine Football Association, who had been allowed to vote on the matter by Fifa. The AFA’s decision to allow Silva to play is being cited by some in Argentina as further proof that they favour the big clubs such as Boca Juniors.

South America’s Goal of the Week

The winner this week is in fact an unbelievable own goal scored by San Martín San Juan’s Diego Sosa, which gifted Estudiantes a 1-0 victory.

Chelsea’s fortunes can be turned around very quickly, says Hoddle