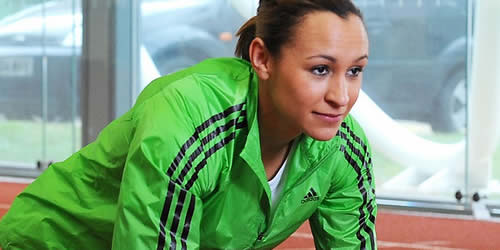 Jessica Ennis had to settle for silver in Istanbul Photo: Brunel University, via Flickr

Where once all that glittered was gold for Jessica Ennis, now she must cling to a second silver lining after another world title slipped through her fingers in Istanbul.

Dethroned as the world heptathlon champion last summer in Daegu, Ennis was stripped of her indoor title on Friday night, not by her 2011 conqueror Tatyana Chernova but this time by Olympic champion Natallia Dobrynska – the jumps – hers were neither high nor nearly long enough – proving her Achilles’ heel.

Ennis entered the fifth prong of the heptathlon in third place a full 93 shy of Ukraine’s Dobrynska meaning she would have to oust the Beijing 2008 gold medallist by approximately six-and-a-half seconds over 800m.

A mammoth task, not least because Ennis had not competed over 800m in 2012 until last night, and one she would ultimately fail – even if she did romp to victory in that discipline in a new personal best of 2:08.09 to secure a new national record of 4965 points, only to lose out to Dobrynska’s 5013, a new world record.

“The nature of the sport is that you have good events and have bad events but the key is bringing it all together,” said Ennis.

“Two silver medals at World Championships are great but the position I was in going into those competitions, I would have loved to have won a gold medal.

“I do think that things happen for a reason and hopefully things will change for the better in the summer.

“I’ve learned loads from this and loads from Daegu and there are loads of things I think I can improve on. I’m stronger, I’m faster and I’m in better shape and hopefully I can bring it together in the summer.”

Ennis’ multi-events campaigns follow a similar pattern and in Istanbul it was no different – a superb hurdler in her own right she blitzed home in 7.91 seconds – a time she has bettered only once – to reap 1150 points after one event and a sizeable lead.

It’s a measure of her hurdling abilities that during yesterday’s women’s hurdles heats, only one athlete – world champion Sally Pearson – could better Ennis’ time, but the high jump followed and all was not right.

Staring down the barrel of settling for a best clearance of 1.84m – ten centimetres short of her personal best – Ennis went over 1.87m at her third and final attempt – an effort that got coach Toni Minichiello out of his seat and applauding, but that was as good as it got.

The gap at the top was subsequently narrowed and Ennis was expected to lose her lead after the shot put, only to produce a personal best of 14.79m to ensure she stayed atop of the pile by the slenderest of ten-point margins.

But the long jump proved her undoing. Ennis could manage just 6.19m, a full 38cm short of the personal best she set in Birmingham last month and as a result, Dobrynska, who won the long jump competition, moved into what proved an unassailable lead.

“Dobrynska has got a knack of coming out really strong in Olympic year, producing brilliant performances and winning gold medals – she’s in great form,” added Ennis.

“I take a lot from the fact that it was a world record that beat me. Obviously there’s the disappointment because I’ve lost my title.

“But there were some good performances as well as some things that I need to go away and work on. Dobrynska’s world record shows how good the standard is.”

Elsewhere, GB’s team captain Tiffany Porter proved her critics wrong in the best possible, way, romping through the 60m hurdles heats in 8.00 seconds to close in on a place on the podium.

The Michigan-born and bred British record holder was challenged at Thursday’s press conference to sing God Save the Queen, having switched allegiances in 2010, but on Friday she was focused on the track.

“It was a good run, I came here wanting to qualify and I did that. The aim for the week here is to win.”

Meanwhile, defending 60m champion Dwain Chambers eased his way through qualifying in 6.65 and could celebrate a few days to remember with the Court of Arbitration for Sport ruling on the British Olympic Association’s byelaw on Monday, the outcome of which will decide his London 2012 eligibility.

“I’m just enjoying being here and trying to defend my title,” said Chambers. “You have to be professional and do your job. I’m just concentrating on being here at the moment and being part of this British team.”

World 5000m champion Mo Farah also eased into the 3000m final while there impressive performances from triple jumper Yamile Aldama – who advanced with a season’s best of 14.62m and Joe Thomas who cruised into the 800m semi-finals.

Aviva has been backing the GB & NI Team since 1999. Now it’s your turn. #BackTheTeam