Andy Gray: Chelsea’s defence is the key to beating Barcelona 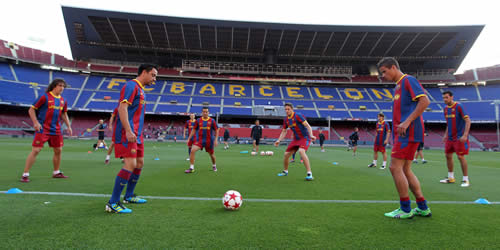 Chelsea are a poorer team than when they last played Barcelona in the Champions League in 2009 and were eliminated – this semi-final is a one-horse race, I fear.

I don’t think Chelsea’s big guns like John Terry or Frank Lampard are anywhere near as good as they were three years ago and I think Barcelona, and Lionel Messi in particular, are better.

There is a combination of facts that make life really difficult for Chelsea to progress. Most importantly, how do you stop Messi? He’s in unbelievable form and is simply world-class.

I expect Barcelona to beat them comfortably – but Chelsea do have a chance to progress and that is the way they have to approach it.

Chelsea have to believe that they have enough quality footballers to turn in a performance.

I think it may be beyond them but it all depends on how the defence reacts – if they don’t play above and beyond then the Blues could be beaten by three or four.

The Barcelona attack is incredibly hard to defend against – they create chances galore.

Only Chelsea owner Roman Abramovich can say whether interim boss Roberto Di Matteo could be in with a shout of the Stamford Bridge job if they do the unthinkable and dump Barcelona out of the competition.

Di Matteo has done a good job since replacing Andre Villas-Boas. I wouldn’t say he has turned it around just yet and this is a fantastic Chelsea side, because I think they were very ordinary against Benfica.

Ten-man Benfica were the better side on Wednesday – it’s not as if he has got them playing magnificent football – but he has got the results.

However, the only way he could be in the frame for the job is if they win the Champions League. The dismissal of Avram Grant showed us that.

Grant was a penalty kick away from winning Europe’s biggest prize but would he have kept his job anyway? I’m not so sure he would have done.

Abramovich will want someone in who he knows and likes, and who is a big name – and I don’t think Di Matteo fits the bill.