Steven Oldham looks back at the main talking points after an entertaining Bahrain Grand Prix, where Vettel clinched victory 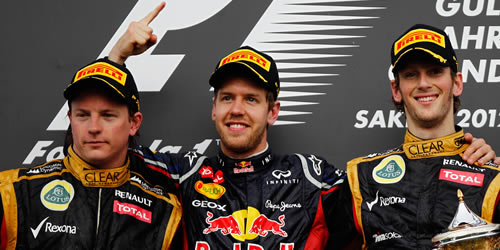 The midfield teams are genuine contenders

The double podium for Lotus further emphasies what we have seen in the opening three races – the traditionally middle-of-the-pack teams will no longer accept that the big three will walk away with every race victory. In a season already containing several firsts, Frenchman Romain Grosjean scored his first podium in Formula 1, with he and team-mate Kimi Raikonnen sharing the honours of scoring Lotus their first podium since the famous name returned to the sport. Factor in that both were closing on Sebastian Vettel before the final stops and it is clear the likes of Lotus are keen to break the monopoly held by Red Bull, Ferrari and McLaren for so many years.

The title will go right to the wire

Even with only four races gone, it appears clear the title will still not have been decided by the time we’re watching the annual madness at Interlagos in mid-November. Four winners in four races. Six constructors already on the podium. Things won’t get as ridiculous as seeing Narain Karthikeyan lap the entire field and give HRT their first victory but this season holds a few more surprises up its sleeve yet. We have seen that on their day, both Sauber and Lotus have cars capable of winning races. With the big boys tripping over themselves to beat each other, who’s to say we won’t see the likes of Raikonnen mount a stealthy yet possible slant at the title in his comeback year?

If things remain the same, F1 should not go to Bahrain in 2013

From what was an unusually entertaining race at Sakhir, thoughts were never far away from the tensions surrounding Bahrain at the present time. Things may have stayed calm in the race but events off the track took attention away from the racing all weekend which is incredibly disappointing for everyone involved. One year off is not enough. The longer the troubles remain, the worse the headlines will get. That the drivers and teams felt unsafe despite the presence of the police should tell Bernie Ecclestone all he needs to know. Bahrain’s population need many things for their country to move forward. At the moment, a motor race is not one of them.

Rosberg is fortunate not to be penalised

Nico Rosberg can count himself a very lucky boy to still be fifth in Sunday’s race after running not one, but two chasing cars off the road. One can’t help but wonder what penalty would have been served if it was the other Silver Arrow of Michael Schumacher taking liberties with Fernando Alonso and Lewis Hamilton. Schumacher, whose dubious tactics over the years sour memories of someone we should feel privileged to have watched at his prime, would no doubt have been slapped with a 30-second time penalty and a 10-place grid drop for Spain. Maybe Rosberg’s first victory has given him the inner steel and mindset a race winner needs to succeed.

Lewis Hamilton came into the season with one aim: consistent points finishes. So far, the McLaren driver is doing exactly that and despite not winning a race, sits second in the title standings behind Sebastian Vettel. This tactic could take him to his second world title, and Mark Webber, despite not having stood on the podium yet this year, sits pretty in third just five points back. Consecutive fourth places isn’t championship winning form but they are a good solid building block for the Red Bull driver to mount a serious challenge in what is likely to be his last season with the team.

Watching Chelsea beat Barcelona made me think of Mike Atherton