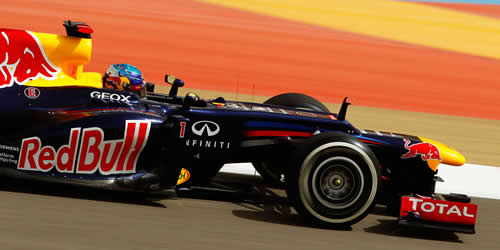 Sebastian Vettel could not hide his delight after pipping McLaren’s Lewis Hamilton to pole position for Sunday’s Bahrain Grand Prix.

The defending double world champion, who had failed to impress in qualifying for 2012’s first three races, sealed the 31st pole position of his Formula 1 career with a time of one minute 32.422 seconds at Sakhir, ahead of Hamilton and Red Bull team-mate Mark Webber.

“It feels great, which I owe to the team,” said Vettel. “It’s not been an easy start to the season, but what we have done here is what we expect from ourselves.

“We’ve been busy working on the car, trying to find the right solution, with the boys hardly getting any sleep over the last four race weekends.

“They’ve certainly not had much here, but the car is much better and it’s great to have just beaten Lewis for pole.”

Vettel’s team-mate Webber, who will start third on Sunday, admitted he was surprised by his team’s performance in qualifying.

“In the end we’re satisfied to be towards the front,” he said. “There have previously been some big gaps to the opposition, so it’s pretty surprising to be as competitive as we are on a track that does not play to our strengths.

“But we’re at the front, I’m pleased for the guys, and we can have a good race from there.”