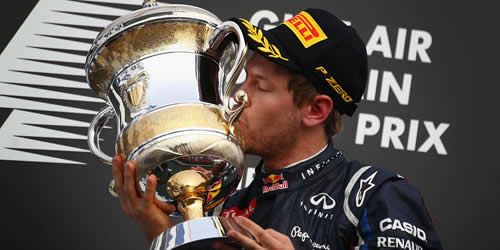 Sebastian Vettel reflected on an “incredible” Bahrain Grand Prix after the Red Bull driver sealed his first victory of the season at Sakhir.

The defending double world champion led from pole and held off Lotus’s Kimi Raikkonen in what turned out to be a close battle.

Romain Grosjean was third in the other Lotus, while McLaren’s Lewis Hamilton finished eighth and Jenson Button retired.

“I think it was an incredible race, extremely tough,” said Vettel, who now leads the drivers’ championship standings by four points, ahead of Hamilton.

“We had a good start, I was able to pull away immediately which turned out to be a big advantage because we always had to go on a used set of tyres as we used nearly all of them in qualifying. Kimi was very quick, so was Romain.

“It’s a very tight season. The cars are very close to each other. Small things can make a huge difference. We started the season with McLaren as the best car by far but we have seen Sunday can be a different picture. I think they still have one of strongest packages.

“China was a very good lesson for us, driving two packages. For here we focused on our new package and pushing that forward. I’m just happy for now. I don’t care what happens in the next race, at least not today.”

Raikkonen admitted his disappointment at not being able to clinch victory in Bahrain despite his best efforts.

“I think we gave ourselves a chance but I’m disappointed I didn’t manage to win it,” he said. “I made a small mistake at the beginning, lost one place to Ferrari, and I had to get that place back.

“In the end we were not fast enough to win. I got one chance to get past Sebastian but I chose the wrong side. That was the only chance really.”