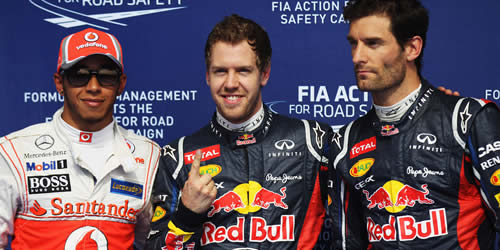 Vettel’s time of 1.32.422 was almost a tenth quicker than Hamilton and came as something of a surprise as McLaren and Mercedes had seemed stronger than Red Bull in free practice.

Hamilton’s teammate Jenson Button joins Webber on the second row, ahead of Nico Rosberg and Daniel Ricciardo in the Toro Rosso, with the Australian claiming his best ever grid slot in his short career.

Vettel claimed his first pole since Interlagos last year and believes he can turn it into a competitive race performance on Sunday.

“We should be better off in the race,” he said. “Our race pace has proven to be consistent in the last couple of races.

“I’m happier with the way the car feels. We should be able to get the same kind of feeling and result on Sunday.”

Lotus’ Romain Grosjean and Sergio Perez’s Sauber complete row four, with both Fernando Alonso and Paul di Resta opting not to set a time in Q3.

In doing so, the Ferrari and Force India drivers have saved a set of tyres for the race, in which tyre wear is set to form a crucial part of race strategy.

The same tactic was employed by Lotus driver Kimi Raikkonen, who declared he would easily have got into Q3 but preferred to save tyres for the race – the Finn starts 11th.

Michael Schumacher’s surprise exit in Q1 allowed Heikki Kovalainen to shine in the Caterham, giving the team their first entry into Q2 this season.

Kovalainen drove a storming lap – the last of Q1 – to put the seven time world champion out in Q1, despite Schumacher driving arguably the quickest car this weekend.

The Mercedes’ driver’s DRS system, which can be used without restriction in qualifying failed, leaving the German a sitting duck for a plucky underdog such as Kovolainen to take advantage of.

Toro Rosso’s Jean-Eric Vergne failed to make it out of Q1 for the third successive race – a fact magnified by team-mate Ricciardo posting the second fastest lap of Q1 behind Sauber’s Perez.

Charles Pic outqualified Marussia teammate Timo Glock for the first time this season, and HRT’s Pedro de la Rosa also went quicker than Glock – the first time the Spanish team have outpaced any of their rivals in qualifying this year.

Pastor Maldonado was hit with a five place grid penalty for changing his gearbox and will start 22nd.