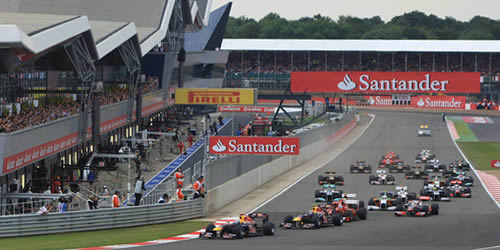 The start of the 2011 British Grand Prix Photo: Silverstone

Silverstone has announced that it is adding two new grandstands to increase capacity ahead of the British Grand Prix in July.

Race organisers have reported that ticket sales for the British race are up 10 per cent on the same period last year – and with several categories already sold out, the circuit has moved to up capacity by an additional 3,500 for this year’s race on 8 July.

Managing director of Silverstone Circuits Limited Richard Phillips said: “We had fantastic crowds on all three days of last year’s British Grand Prix and interest in this year’s event has been even higher.

“Increasing our capacity will enable even more fans to experience the spectacle, excitement and drama of Formula One at Silverstone.

“We pride ourselves on striving to provide the best experience for fans – with grandstands and General Admission areas offering exceptional views of the track, first class spectator facilities and a host of exhilarating off-track entertainment, the fans can expect another fantastic three days at this year’s British Grand Prix.”