I rejoined Barcelona to play in games like these, says Fàbregas 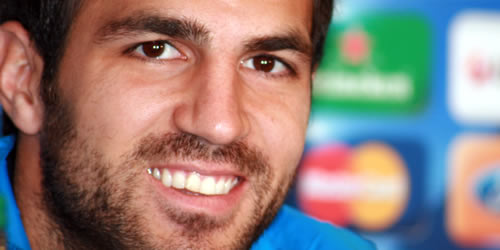 Cesc Fàbregas admits he is relishing the chance to be involved in Barcelona’s heavyweight clashes ahead of the Champions League semi-final first leg against Chelsea on Wednesday night.

The 24-year-old completed a £29m move back to Camp Nou from Arsenal last summer, ending an eight-year spell at The Emirates, and the Spain international has already won the Uefa Super Cup and Fifa Club World Cup this season.

And Fàbregas, who was a beaten finalist with the Gunners in 2006, is relishing the chance to help Barcelona get the better of the Blues at Stamford Bridge.

“I have played much more than I expected,” Fàbregas said. “I came here to learn, to get better as a player and also to experience weeks like we are going to start tomorrow.

“The chance to play Chelsea in the semi-final of the Champions League, to play against Real Madrid [on Saturday], which if we win, we are right back in the title race, and then playing against Chelsea again.

“It’s the most important week of the season and that’s why I came back to Barcelona, to experience weeks like this.

“My team-mates are more used to it, but to experience situations like this is a dream for me.”

Chelsea striker Fernando Torres has an impressive record against the Spanish champions with seven goals in ten appearances during the 27-year-old’s spell at Atletico Madrid.

But Fàbregas, who was Torres’ team-mate in the Spain squads that won Euro 2008 and the World Cup in 2010, has warned his Barcelona colleagues that the former Liverpool striker and Didier Drogba will both be difficult opponents for the holders – whoever starts on Wednesday.

“I started playing with Fernando six years ago in my first World Cup in 2006,” added Fàbregas. “So I know him very, very well.

“He’s a very important player. You always respect him and expect good things from him because he’s a world class striker.

“We expect one of them [Torres or Drogba] to play but not both. They have similar qualities. They can both bring many positive things to the team. Definitely Fernando Torres will be a big threat.”

PFA Player of the Year 2012: Van Persie the leading candidate

PFA Player of the Year 2012: Van Persie the leading candidate