Andy Gray: Chelsea must score at Barcelona to stand any chance 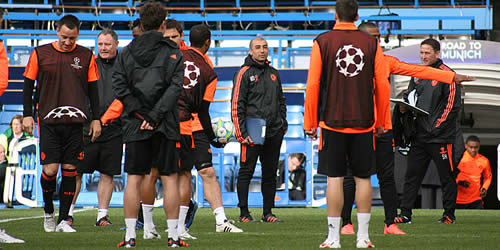 Chelsea have to score at Camp Nou if they want to stand any chance of going through – and they will need to play better and be even luckier than they were in the first leg.

Can they do that? I’m not so sure. They did remarkably well to get the result they did on Wednesday. Lots of things went their way – some good fortune went a long way towards them getting a result.

Even though I thought Barcelona were not quite at their very best, they still created enough chances to have won the game. And Barcelona must feel that they are good enough to win the game at Camp Nou.

In all the games Barça have played at home this year, there has only been one game in which they haven’t scored more than two goals.

That tells you the size of the task that Chelsea are up against. And the Blues are going to need another performance like the one at Stamford Bridge – backs-against-the-wall – to go through.

They could go there and yet again everything could go right for them like it did on Wednesday. Barcelona could hit the woodwork five times this time, Petr Cech could pull off five great saves or an offside decision may go their way.

All of these things, you feel, can still happen – but it’s just a huge ask. I would’ve fancied the Chelsea of three or four years ago to get a result there. I’m not sure this Chelsea side are as good as that.

We have to remember that Chelsea only had one shot on target during the whole of the 90 minutes when they were at home. So it’s going to be very difficult for them to score.

If they do score, that would give them a great platform – but this Barcelona side are capable of scoring three – there is no mistake about that. And whether Chelsea score or not won’t concern Barcelona, they still feel that they’ve got enough to get through.

They could’ve scored three at Stamford Bridge – and nobody would’ve complained. So I think it’s a massive task.

Roberto Di Matteo does deserve a lot of credit but I still think we need to wait to see if he’s the right man to take the job permanently.

If at the end of Tuesday night he’s got them through to the final then we can heap as much credit on him as we want and deservedly so.

I’m not trying to play down Chelsea’s chances, I just think the lads will realise that they’ve got a massive job to do and everything has to go their way because without doubt Barcelona are the better side.

Back to domestic action, and love him or loathe him, if Manchester City had have been able to call upon Carlos Tevez all year they probably would have been celebrating a first Premier League title by now.

As it is, City have to win all their games. There is no room for error for Roberto Mancini’s men now and they know that. They have got to go and win all of their games – and that includes beating Manchester United at the Etihad Stadium and beating Newcastle away from home.

It’s certainly not over and United can still slip up, with some tricky games starting this weekend against Everton and away against Sunderland, and City have to believe they can still come out on top.

The Premier League is so competitive and unpredictable that there is room for United to drop points – of course there is. We didn’t expect them to drop points against Wigan but they did.

It’s a strange league this year and I think it’s still open and undecided, but if City don’t win all their games from now on then it doesn’t matter.

When you look at Tevez, it’s almost impossible to say they would be top if he had played all year.
People are saying that because he’s come back and got a hat-trick. Ant it is possible because I think he is better than the others and is a perfect foil for Sergio Aguero.

QPR can beat anybody at Loftus Road, Hughes warns Tottenham

Wenger backs Arsenal to bounce back with win over Chelsea