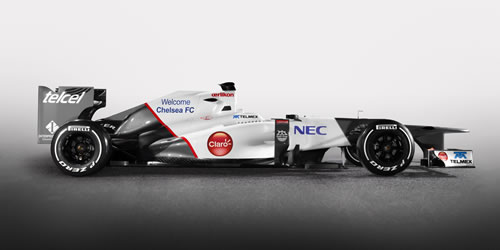 Chelsea and Formula 1 team Sauber have announced a deal that explains the mysterious inscriptions on the Swiss team’s cars at recent races.

Chelsea’s crest will appear on the cars of drivers Kamui Kobayashi and Sergio Perez from next week’s Spanish Grand Prix.

The announcement comes after the subtle messages ‘Out of the blue’ and ‘True Blue’ were written on Sauber’s cars during the first four Grands Prix of the new F1 season.

“This is an innovative partnership that will see a football club link up with an F1 team like never before, bringing together two of the world’s biggest sports and uniting our fans,” said Chelsea chief executive Ron Gourlay.

“We share many philosophies when it comes to how the respective organisations are run, from the development of young talent to constantly striving for success.

“Their philosophy towards grassroots development has produced some of the best drivers in F1, which mirrors our dedication to develop promising young football talent through our Academy.

“This partnership will benefit us both greatly, with the potential to create unique commercial opportunities. It is a shared vision to unite the two most attractive sports in the world.”

Sauber chief Monisha Kaltenborn added: “A partnership like this between Formula 1 and football has never existed before in this form, yet there are numerous commonalities and possible synergies.”

Pep Guardiola will manage in the Premier League – Mark Hughes