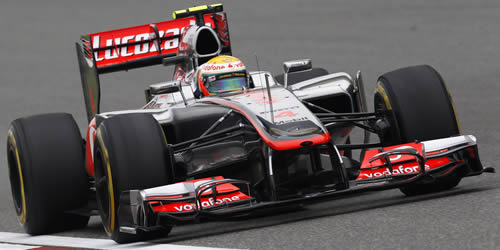 Lewis Hamilton and Michael Schumacher set the fastest times in Friday practice for the Chinese Grand Prix in Shanghai.

McLaren’s Hamilton was quickest in FP1, ahead of Mercedes duo Nico Rosberg and Schumacher, with the 43-year-old edging out Hamilton in the second session, who was just 0.01 seconds quicker than reigning world champion Sebastian Vettel.

The practice sessions underlined Mercedes’ pace at the circuit, aided by their controversial DRS-boosting rear wing system, which was ruled legal by race stewards yesterday.

The Lotus team had led calls for the Mercedes rear wing to be outlawed as it gives the German team a boost in straight line speed – which is crucial in Shanghai, given the circuit has one of the longest straights on the calendar.

First practice was affected by rain, with the Sauber again showing good pace in changeable conditions – Sergio Perez, who took a heroic second place in Malaysia, was fourth ahead of team-mate Kamui Kobayashi in fifth.

Despite Hamilton’s obvious pace here, the highest he will start Sunday’s race is sixth as he will incur a five-place grid penalty for changing his damaged gearbox.

In contrast to Hamilton, his team-mate Jenson Button struggled to deliver optimum lap times – his best result was sixth in FP2, and was a further two slots back in FP1.

Button said: “It’s been a difficult day for me trying to find a good set up. My tyres have been up and down all over the place.”

“It’s very cold here, so it’s difficult to get them hot enough. When you go through Turn One, you damage the tyre a lot because the tyre is not in its working range – and then you lose a lot of rubber.”

Ferrari struggled and a repeat of Fernando Alonso’s victory in Malaysia looks unlikely, given that the Spaniard’s best result was 10th.

The Italian marque are struggling for top speed this season and on that crucial straight, where Mercedes are benefitting from their innovative DRS bolt on, Ferrari are losing time.

Marussia’s Timo Glock suffered a hand injury after exiting the track at Turn One, damaging the car’s nose. But the German will compete in qualifying tomorrow after the team confirmed on Twitter that he was fine after his trip in the gravel.