Chinese Grand Prix 2012: Lessons from a thrilling race in Shanghai

What did we learn from the Chinese Grand Prix, where Mercedes German driver Nico Rosberg claimed his first F1 victory? 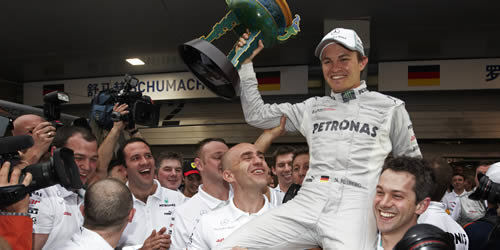 Rosberg not a one-win wonder

Nico Rosberg’s dominant victory on Sunday was highly impressive for a man chasing his first victory in over 100 outings. To keep his cool and maintain the lead into the first corner from the start proved crucial and the German then managed to extend his advantage and was a comfortable winner ahead of the McLaren duo Jenson Button and Lewis Hamilton. It was an assured drive from the Mercedes man. He dealt with the backmarkers quickly and suffered none of the mishaps that befell Sebastian Vettel and Button last time out. His first victory was a long time in the making but it will definitely not be his last. Button’s admission that Rosberg can challenge for this year’s drivers’ championship cements the German’s potential.

Hamilton’s gently, gently approach could take him to second title

Hamilton leads the world championship after the Chinese Grand Prix despite failing to win any of the three opening races. A hat-trick of third places worth 45 points sees him two points ahead of team-mate Button in the standings, and the 27-year-old is the only man to stand on the podium in every race this season. While he would welcome victories to extend his lead, Hamilton – who revealed he is targeting consistency in 2012 – is quietly racking up substantial points finishes whilst his main challengers peak and trough. Rosberg didn’t score points in Australia or Malaysia, Button and Vettel didn’t score in Malaysia. The winner in Sepang, Fernando Alonso, managed just two points in China, and Mark Webber is pushing his Red Bull to the limit to be the best of the rest. It’s not quite the hare and tortoise situation, but Hamilton’s cautious approach has so far paid dividends.

A collision between this pair in Melbourne saw the Lotus driver become the first retirement of the 2012 season. There was debate as to who was at fault, and during their exchanges on Sunday, both came perilously close to prematurely ending their respective opponent’s race. Some wonderful attacking and defensive driving was displayed, but there is surely only so many times this can happen without both ending up in the wall or gravel traps. What Williams lack in outright qualifying pace, they are capable of reclaiming in the race as was seen by the extremely close racing in China, and if this continues, Maldonado and Grosjean will be in close contact for most of the season. It will only take one serious incident to turn this healthy rivalry into a soap opera similar to the one we witnessed between Felipe Massa and Hamilton last year.

You don’t need DRS to pass at Shanghai

The DRS zone at the end of the 1.1km straight inevitably led to some overtaking on Sunday but the drivers didn’t wait until this particular stretch – there were thrilling manoeuvres all around the track. The field being so close together undoubtedly helps and this is a result of the relatively stable rules in the sport. Last year it would have been unthinkable for a Sauber or Williams to be mixing with Red Bull and Ferrari in the points positions. The incredibly visual marbling of tyres created massive no go areas in the DRS zone with some drivers having to wait until the very last moment at the hairpin to overtake. However, we saw good battles all around the track – particularly at the exit of the hairpin and into Turn Six. Disappointing crowds have led to some questioning Shanghai’s validity on the calendar but the racing is always good and it would be a shame to lose the track from F1.

Massa is in trouble at Ferrari

Whilst Ferrari acknowledge their car is difficult, Massa’s performances this season are worrying. Sitting a lowly 18th in the driver’s standings with no points, the likeable Brazilian will be under increasing pressure until he manages to beat team-mate Alonso outright on track. Even that may not be enough. His time leading the race on Sunday was unfortunately a result of circumstance than performance – anyone can lead the race if they stay out long enough these days. It is obvious Alonso is more capable of wringing a result from the car. Ferrari will see it as unacceptable for one of their drivers to be point-less after three races, and it is hard to see him lasting the season if his current level of attainment continues.