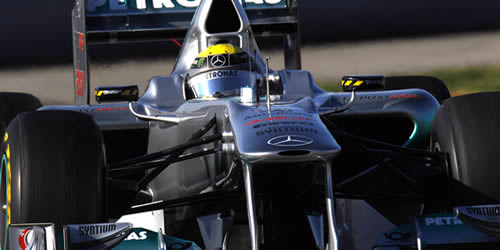 Rosberg’s time of 1.35.121 was half a second faster than his nearest rival Lewis Hamilton, and the 26-year-old will head the field for the first time in his 111th race.

It could be an historic weekend for Mercedes after securing their first pole position since 1955 – and the team are now chasing their first victory since returning to the sport in 2010, whilst Rosberg is yet to win a race.

“It’s a very special feeling. I got a perfect lap,” said Rosberg.

“In the race we have been not as good as in qualifying. It’s not something you can improve quickly, but we are doing our best. I don’t know how it’s going to go, but I’m going to work hard tonight and make the most of it.”

Schumacher is the chief beneficiary of Hamilton’s five place grid penalty after the McLaren driver was second quickest in Q3 – the British driver received the penalty for changing his gearbox.

Sauber continue to show good pace with Kamui Kobayashi claiming an unexpected fourth, ahead of Kimi Raikkonen in the Lotus, while Sergio Perez, the Swiss team’s hero in Malaysia three weeks ago, starts eighth.

The established frontrunners such as Jenson Button, Mark Webber and Fernando Alonso were outpaced by the midfielders but they at least made it through to the final part of qualifying.

The same cannot be said for reigning world champion Sebastian Vettel, who starts 11th after he missed the cut in the dying seconds of Q2 as Romain Grosjean ousted him from the top 10 with no time for the Red Bull man to respond.

Vettel has been beaten three times by his teammate Webber in qualifying this season – unthinkable this time last year.

The 24-year-old has been running a different set up to the Australian although he has the luxury of deciding which tyre he starts the race on tomorrow as a result of not making the top 10.

“I don’t want to blame the result on the car,” he said.

“Mark was faster, full stop. I was convinced on the current package.”

Felipe Massa starts behind Vettel in the Ferrari, giving the under pressure Brazilian his best qualifying session of the year so far.