Fernando Gonzalez, one of Chile’s most famous sporting sons, has ended his tennis career where he began it 12 years ago 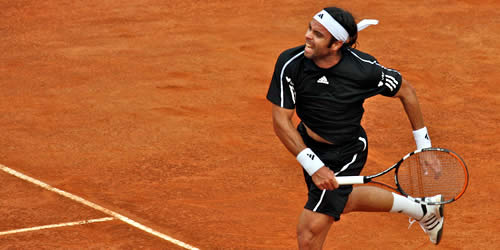 Fernando Gonzalez will be missed by tennis fans around the world Photo: Marianne Bevis

Born, raised—and now retired—in Santiago, one of Chile’s most famous sporting sons has ended his tennis career where he began it 12 years ago, in Florida.

Fernando Gonzalez’s last tournament was a sentimental and entirely appropriate choice. For it was to Miami that he came with his family, as a 12-year-old, to develop a talent for tennis that would take him to No5 in the world, to Olympic medals and to 11 professional titles—and 11 more finals.

It was a bold step for the Gonzalez family—a father who was a keen tennis player but managed a flour mill in Santiago, a mother raised in Italy and his two sisters—but by 17 years old, Fernando was the French Open junior champion and the US Open doubles champion with fellow Chilean, Nicolas Massu.

A year later, he was a professional on the senior tour and he won his first title—against the same Massu—in Florida. But it was back in Chile that Gonzalez won his second title, in 2002, on the golden clay of Vina del Mar, the first of what would become four trophies on home soil and the launch pad for his career.

After his maiden title in Chile, he beat Pete Sampras to reach the fourth round of his first Miami Masters, beat Andy Roddick to reach his first Masters semi-final in Cincinnati and then played his first Grand Slam quarterfinal at the US Open: He would go on to reach at least the quarters of all four Slams. He ended the year with another title in Palermo and a final finish at the prestigious Basel tournament.

And gold became Gonzalez’ colour again in 2004. Once more paired with Massu, he won the doubles Olympic gold—Chile’s first ever gold medal—and, not content with that, took the bronze in singles, too. In recognition of his achievement, he was awarded his country’s top sporting award, the Condor de Oro.

Jump forward three years, and again Gonzalez was Chile’s ‘golden condor’, and little wonder. It was the year he reached the Australian Open final, beating Lleyton Hewitt and Rafael Nadal in the process, his second Masters final in Rome and he ended the year at a career high of No5—and 2008 would be even better.

He carried the Chilean flag at the Beijing Olympics opening ceremony, won a silver medal in the singles and his third Condor de Oro.

However, Gonzalez’s high-impact, high-energy style of tennis—muscular, big-hitting and with a blood-on-the-court commitment to every point—was beginning to take its toll.

In 2009, he won his last title in Vina del Mar and made the semis of the French Open but, come 2010, while still ranked No10 in the world, he took time out after an early loss in Paris to rest a knee problem for three months before trying to make a tentative return on the American hard courts. But he was forced to retire in his opening match at the US Open and, soon after, he had hip surgery.

The good news was that he escaped knee surgery as well, and made it back to full-time training within just five months. He initially worked with Chile’s Davis Cup squad in Santiago but, viewing his career second time around, he had to acknowledge that things had changed.

“It will be symbolic because I feel it will be the beginning of the end of my career.”

That beginning was less than a year ago, and he managed only a handful of events during 2011. Three of them ended with the sinister signal “ret”—his knee forcing retirement even from the Davis Cup play-offs for Chile in September.

This year, he managed six matches in the South American “Golden Swing”, including a final win in Vina del Mar before losing in the second round. And so the announcement came.

The end would be in Florida, the place where the victories began, and his choice was simple: “I came to this tournament many times when I was a teenager, as a fan. Then I had a chance to play here many times as a player, and there were a lot of people from Chile and Latin America here, so I feel at home here.”

The Miami Masters repaid the loyalty by offering him a wild card and asking him to make the men’s draw. He drew Frenchman Nicolas Mahut in the first round, and he lost—typically in a gutsy, all-or-nothing, two-and-a-half hour three-setter. Few will ever question the will to win of Gonzalez, any more than they will dispute that his forehand was one of the most revered in tennis.

It was, in the end, the famous fighting spirit as much as the body that gave in. “I realised that I did not have the same energy. I could not get up in the morning and give the same kind of intensity that’s needed to be at the top.”

He admitted, on the ATP website, that the physical and mental exertion as well as the constant travelling were contributing factors, something that long-time colleague Roger Federer explained:

“I think he’s had too much trouble, too much injury, and maybe now he’s too comfortable living back home. The roads to the rest of the world are far from Chile, so I can understand also maybe the travel had an impact.”

Federer, owner of another infamous forehand, also had words of praise for the man he deprived of that Australian Open title back in 2007:

“I know him from the junior days. He’s always been a great person. He never changed. I think that’s why he gets so much respect right now from all his fellow players, because he’s really well liked; and probably one of the most incredible forehands we’ve ever seen.”

So the dark, handsome, fiery Gonzalez will be missed by tennis fans around the world, but their loss is Chile’s gain. He has, over the years, given time and money to charities in his home country: organised fund-raisers in the aftermath of earthquakes, worked with under-privileged children, and sees the need to involve more youngsters in the sport he loves.

“We need to have more people playing tennis in Chile. I think they need more motivation in many of the cities. It’s a big responsibility for me and Nicolas [Massu] to do something to improve that.”

For a man with three Golden Condors, it should be no problem.